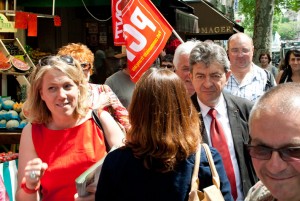 
Jean-Luc Melenchon went in the 20th district, Wednesday, May 30, 2012. He was there to support Didier Le Rest and Danielle Simonnet, Left Front candidates in the parliamentary elections respectively in the 6th and 15th districts of Paris.

The herald of the Left Front in the presidential election, Jean-Luc Melenchon, came to meet the residents of the 20th on Wednesday, May 30, 2012. Arrived at 14:30 at Place Gambetta, he took a walkabout up the street and the Pyrenees. Followed by a crowd of activists, supporters and journalists, he took time to greet many street traders. He has continued on to the bar and restaurant The new star, at the junction with rue de Villiers The Isle-Adam.

In ten days the first round of elections, this operation had a specific goal: mobilizing voters of the 6th and 15th districts of Paris. Both the Left Front candidates in these districts - Didier Le Rest (15th District) and Danielle Simonnet (6th District) - were also at his side.


"These are two people who are  representative of the social movement," said Jean-Luc Melenchon. "One (Danielle Simonnet, ed), on all the battles for migrant workers. And Didier (The Remains, ed), a trade unionist, trade unionist are central to the movement"