Mrs H.J Massingham was one of the earliest women Labour Party candidates, on this occasion for the rural consistency of Petersfield, Hampshire 30 May 1929. 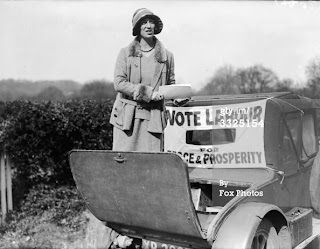 Mrs Massingham may be related by marriage to Henry Massingham (1860-1924) of Norwich, Editor of  Eastern Daily Press, The Star Daily Chronicle, Labour World, and later worked for the Guardian and Daily News


Labour is deeply concerned about Agriculture which, having been a plaything of both the older Parties, is now facing very critical times both for farmers and workers.

Landlordism has ceased to be able to perform its function and it cannot be allowed to go on starving the Land of capital and the countryside of cultivation and people, and generally obstructing national need and development. The Land must therefore pass under Public Control. Meanwhile, Farmers should have Security of Tenure; Fair Rents; Capital and Credit Assistance;

A system of Organised Marketing; and Stability in the Prices of main crops and products.

Workers should have a Minimum Wage; Unemployment Insurance; Easier Access to Holdings; and Better and Untied Cottages. A Labour Government would work with representatives of all the interests concerned to gain these objects.