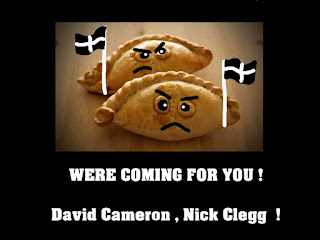 A Cornwall Councillor has resigned from the Liberal Democrats in protest against the actions of the national party and the introduction of the "pasty tax".

Chris Pascoe announced his resignation yesterday and said that other members of the party could also swap sides in the next few days.

Mr Pascoe said that the recent local election results in other parts of the country meant that within the party "everyone is scared about their position".

He said: "I think Nick Clegg has become the lap dog of the Conservatives and is taking all the flak. I think the pasty tax is an insult to the Cornish."

Mr Pascoe was also at the centre of a huge planning row last week over the approval of a 1,500 home development near to land he owns.

But he said this was not the reason for leaving the Lib Dems and that he had been considering the move for some time.

Mr Pascoe is now in talks with the Independent group at Cornwall Council.