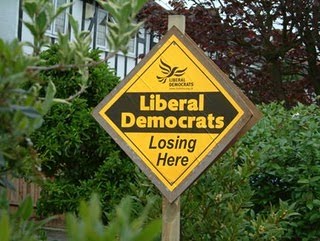 For the first time in decades, the Labour Party has overtaken the Liberals to become the second party in the polls behind the Tories in the West Country.

The West of England has a unique position, that while the Labour Party has always polled well in a few strongholds, it never fully eclipsed the Liberal Party as it did in the rest of England. This meant that after the Urban District Councils were abolished in 1972, taking away the possibility of Labour controlling small towns in rural areas, the Labour vote has been in long term decline in West Country rural constituencies.

The Liberals were able to position themselves as the mainstream anti-Tory vote, benefitting from widespread tactical voting from Labour voters.

But not any more. According to the Western Morning News

A 17 per cent fall in support since the May 6 ballot underlines how voters in the region are deserting the party in the wake of the coalition with the Conservatives.

By contrast, the South West electorate views the Tories with less suspicion as its vote only dropped 4 per cent despite the deep and unpopular spending cuts.

Labour has reaped the benefits, leap frogging the Lib Dems to become the second most popular party in the South West, a status it has not held in the region for decades, thanks to a 15 per cent surge.

The findings will cause deep anxiety in Lib Dem ranks since the South West was the party’s power base long before leader Nick Clegg’s union with David Cameron.

While Labour is pleased to be the leading “challenger” to the Conservative’s South West dominance, they will be aware that the Tories stand to clean-up in the region.

According to the survey, the Conservatives are on 39 per cent in the South West, down from the 43 per cent it polled in the region in May.

The survey, carried out by pollster Marketing Means this month, puts Labour on 29 per cent, up from 14 per cent at the general election.

Lib Dem support, suffering from the student protests that followed abandoning a pledge to scrap tuition fees, is now just 18 per cent in the region, down from 35 per cent.

A resurgent Labour could clear the path for the Tories to take marginal Lib Dem parliamentary seats in the Westcountry such as Torbay and St Austell and Newquay.

Graham Dumper, research director of Ashburton-based Marketing Means, said: “The formation of the coalition Government has seemingly hurt the Lib Dem brand as the main opposition to the Conservatives in the South West.

“The party has spent years building up its credentials as a defender of ordinary people against the interest-based politics of the ‘Big Two’.

“This approach chimed with many voters in a region that values its distinctiveness and independence.”

The poll comes ahead of May’s local elections, when ballots could re-shape Plymouth and Torbay unitary councils, as well as districts across Devon and Somerset.

The next Cornwall Council votes is not until 2013. Teignbridge District Council is the only Lib Dem-led local authority in Devon and Cornwall after disastrous 2009 elections. Mr Dumper added that, for the sake of the coalition, some Conservative officials might be hoping that the Lib Dems avoid a drubbing across the country.

He said: “The Conservatives would not want to see their coalition partners wobbling at this stage, raising the prospect of an early general election before the recovery they hope their policies will bring.”

The detailed analysis, the first in a series of monthly South West polls by the firm, surveyed around 600 people in the wider South West.

Even in Cornwall, where the Lib Dems have held every parliamentary seat, only 18 per cent would vote for the party now. There Conservatives are on 36 per cent in the county and Labour 27 per cent.