See You In London - Brothers & Sisters 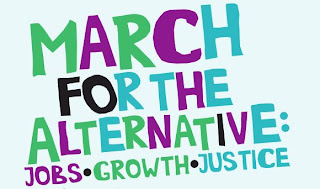 Join us and march for an alternative to slash and burn

The Government’s policies will break Britain, warns Brendan Barber. The solution is investment

The size of Saturday’s demonstration will reflect the scale of the anger and concern of the British public – anger and concern driven by the Conservative-led Government’s reckless approach to deficit reduction and public service reform.

As if £81 billion of cuts to public services and welfare benefits was not bad enough, the Government seems intent on top-down reforms which will change the nature of the NHS, education and a raft of other public services as we know them.

The result will be more marketisation, more fragmentation and more public money being sucked out the system to pay dividends for the major outsourcing companies. This week’s Budget has done little to allay fears that the Government’s programme of cuts and “reforms” is driven more by party politics and ideology than it is by economics or concerns about the quality of public services. Moreover deep, front-loaded cuts will stifle economic recovery, and put one million public and private sector workers out of a job.

As the TUC argued in its Budget submission, there is a credible alternative to the Government’s “slash and burn” approach to public spending. First, Britain needs a progressive approach to taxation – closing the tax-avoidance loopholes, introducing a Robin Hood Tax on financial transactions and abandoning the recent increase in VAT.

Such a move would shift the burden of deficit reduction from the poorest and most vulnerable who will suffer as result of the Government’s attacks on benefits, to those whose shoulders are financially broader.

Third, and above all, Britain needs a clear plan for economic growth. We need investment in high-quality employment programmes, in real opportunities for the one in five young people who are neither in work nor education.

We need a government big enough to admit its economic prescription for the ailments of the British economy is not working, and to accept that cuts are not the cure.

One march, no matter how large, won’t persuade the Government to change course. But it will mark an important milestone in the campaign to get Britain back on track, to chart a course toward economic recovery based on growth, justice and jobs.

I expect Saturday’s event to be an historic occasion – and I hope ministers will listen to the thousands who join us to March for the Alternative.

Brendan Barber is general secretary of the TUC