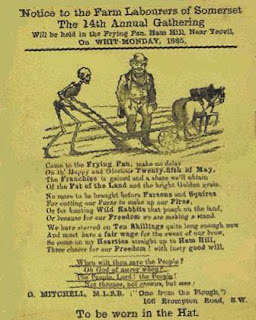 Jeremy Browne Lib Dem MP slams all those who oppose cuts to rural communities as "Deficit Deniers". This from an MP who allegedly represents a constituency with rural areas.

With the Lib Dem's facing meltdown in the local District Elections in May and opinion polls showing the Lib Dem's losing all but three seats in the South West, at least we wont have to listen to Mr Browne's Westminster rants for very much longer.

Browne is well known for preferring the comforts of London rather than listening to his electors in Taunton, even local Lib Dem activists have been moaning about his absence in the local paper. Local activists who are in many cases opposing cuts.

Roll on May Local Elections

In a typical week earlier this month, the Radio 4 Today programme, having set itself against police reforms the previous day, had just found yet another deficit denial frontier. And it was only Wednesday.

Labour official spokespeople are the same: Exhibit A, DCMS Shadow Minister Gloria De Piero writing on why we should not reduce the arts budget in Total Politics magazine last month:

‘It is as simplistic to accept the inevitability of cuts to arts funding as it is to make those cuts, as the coalition has done – too deeply, too quickly.’

I enjoy the countryside, and the arts. I also see the obvious value in core public services like schools, the NHS and our armed forces.
But when Ed Miliband delivers his cop-out for all people who prefer their sums not to add up – ‘too much, too soon’ – he is so dangerously wrong that he actually threatens our national well-being.

In this budget week, if there is an overall criticism to be made of the government, it is certainly not that it is being too radical.

Britain is still borrowing an extra £425 million every day. Just the interest on that debt is now almost £1,000 million a week. That is money from ordinary taxpayers, not spent on public services, but poured away. We are still living way beyond our means with the national debt continuing to rise.

Meanwhile, an aging population is pushing up the cost of pensions and healthcare, while the percentage of the population of traditional working age continues to fall.

We cannot wish this all away. It is always a good idea to manage the national finances responsibly, but in an era of dramatically increasing global competition, it is absolutely essential.

Last week, before crisis struck Japan, I was due to be in China and South Korea.

China is now the second largest economy in the world. Its economy doubles in size every 7-8 years.

South Korea has world-class companies like Samsung, which alone is bigger than the entire economy of Malaysia. In the last two years, South Korea applied for more patents than Britain and Germany combined, despite having less than half the population. This inventiveness and enterprise is driving rates of economic growth way in excess of those in Europe and North America.

In these circumstances, Britain really cannot afford not to undertake radical change. If we carry on with a ruinous budget deficit and unreformed public services, and if we duck every opportunity to improve efficiency and reduce waste, and if we avoid asking ourselves any tough questions about raising education standards and promoting enterprise, Britain will be left behind.

Anyone who shares my ambitions for a more prosperous, just, liberal and socially mobile society, with the necessary resources to support strong public services and improving standards of living, has a clear responsibility to prevent that from happening.

It is not the Government’s bold and necessary programme that is the threat to Britain’s future; it is the opposition to it that represents the real high risk option.