Tories Set To Sell OUR Forests - Our Future ! 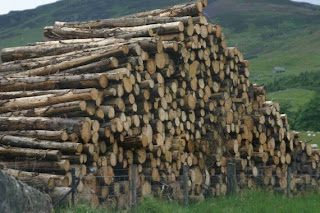 Ministers were planning to make like a tree and leave the forests today - but they were leaving them to commercial exploitation with a massive sell-off of public forests.

Environment Secretary Caroline Spelman is set to announce plans to sell off around half the 1.85 million acres of woodland overseen by the Forestry Commission, according to The Sunday Telegraph.

The sales would cut open a path for commercial exploitation, with developments such as holiday villages, golf courses and commercial logging.

Allan MacKenzie, the secretary of the Forestry Commission trade unions, warned that they would fight the sell-off.

"Once we've sold it, it never comes back. Once it is sold, restrictions are placed on the land which means the public don't get the same access and facilities that are provided by the public forest estate," he said.

"The current system means a vast amount of people can enjoy forests and feel ownership of them. It is an integral part of society."

The Department for the Environment, Food and Rural Affairs defended its proposals, saying its "strategic approach" would modernise woodland habitats.

"We will ensure our forests continue to play a full role in our efforts to combat climate change, protect the environment and enhance biodiversity, provide green space for access and recreation, alongside seeking opportunities to support modernisation and growth," a spokesman said.