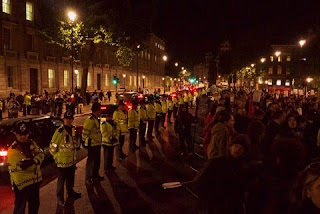 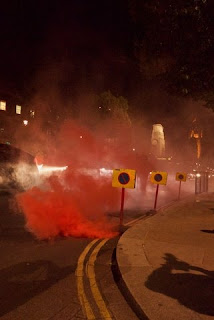 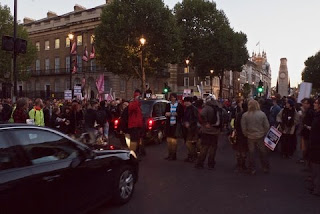 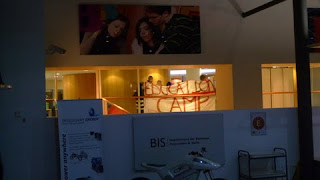 3,000 students and trade unionists marched in London on 20th October 2010 against the Coalition's spending (cuts) review.

The crowd stopped traffic in Whitehall, the first flares in the protest were thrown , Police according to reports laid back (no doubt due to Coalition cuts in Police numbers and terms and conditions).

According to a Indymedia reporter a dozen or so plucky students (some from SOAS) decided to visit the Department of Business and Skills in Victoria Street (around 8:00pm) , and entering the large glass foyer, opened up tents and occupied the reception.

BIS was chosen as a target according to a representative of SOAS (School of Oriental and African Studies) as it is where Vince Cable (Liberal Democrat Business Secretary) works alongside a host of MP's.

The aim was to occupy the space and to pressurize Vince Cable to listen to the public, as the cuts brought to light today and the direction of the con-dem coalition government isn't right according to the students. They believe it is crucial their voices are heard.

After nearly an hour, police arrested four of them apparently for aggravated trespass, and the others decided to leave voluntarily.

Thanks to Indymedia for pics

Oxford Protest Against the Cuts on Carfax Tower

As the government announced serious cuts to services across the country, a group of Oxfordshire residents used prominent Carfax Tower as the site of their protest against the policy. As the government announced serious cuts to services across the country, a group of Oxfordshire residents used prominent Carfax Tower as the site of their protest against the policy. The group calls themselves 'Oxfordshire Residents for Public Services', and said that they had no choice to but to take action against cuts to services.

Janine Marlow, one of the two protesters arrested today said

'The cuts announced today are aimed at the poorest and weakest members of society, who are paying the debts that rich bankers created. Cuts are already bringing the economy towards recession. Oxfordshire residents will see their whole way of life changed over the next four years, with young, poor and disabled people suffering the most.'

“Tories have always opposed proper funding for public services. Now they have got into power, they are using the recession as a smokescreen to rush through huge cuts to the public services used by the majority, while cutting the corporation tax paid by the bankers who caused this crisis. This has nothing to do with sensible economics, and everything to do with right-wing ideology”.

In other parts of Oxford street theatre and a samba band accompanied a rally against the cuts in Bonn Square.