Mike Walker Editor of The progressive rural journal Country Standard commenting on the BBC's Report which, highlighted the potential impact of massive cuts in public services serving rural communities, that

"If Caroline Spelman the Minister for Rural Affairs was not willing or able to stand up for rural communities she should step aside".

"Some of the biggest jobs loses announced to date have been in rural areas, areas where it will be almost impossible to secure alternative work".

"The savage cuts to rural bus services will hit working people and the elderly the hardest, cutting them off from access to jobs, shops and leisure facilities".

"Many rural communities were standing on the edge of a precipice and this Coalition Government was going to push them over, if it had its way". 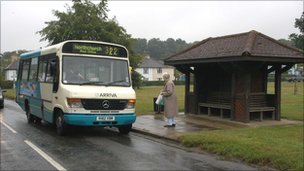 Some services play a more vital role in rural areas than in urban communities.

With the publication of the government's spending review just a week away people living in the countryside fear the impact of any cuts could be especially acute.

For rural communities, there is a lot at stake and there will be an anxious wait for those worried about the future of the local school, the rural bus service, perhaps the meals-on-wheels service.

Many rural services have struggled to survive even in the economic "good times".

That, in large part, is because providing those services in scattered, sparsely populated communities is relatively much more expensive than in urban areas.

So the fear is that both national and local government will be tempted to cut back on rural provision, in favour of shoring up services in the cities - opting to help those more easily, and more affordably, reached.

Whatever the headline figures which come out of the spending review, it's likely that it will be some time before the full impact on rural communities is felt.

A high proportion of rural people are employed in the public sector, bringing fears that jobs will be lost in a further blow to the countryside economy.

Now the Liberal Democrat peer is warning that spending cuts are likely to have a disproportionate impact in the countryside.

Such concerns have traditionally been made clear to ministers by the Commission for Rural Communities.

Its mission statement has been to bring the concerns of people living in the countryside to the corridors of Whitehall, to be a voice for folk who often complain they are forgotten by policymakers.

However, that is changing. It has already been leaked that some 50 countryside quangos are up for the chop and the CRC is among the first organisations confirmed to be facing the axe.

The list was included in a letter from Cabinet Office Minister Francis Maude to other ministers, dated 26 August, which was leaked to the BBC's Politics Show.

British Waterways, which is responsible for the upkeep of the canal network, is apparently on the hit-list.

Other, perhaps obscure but arguably important organisations, such as the Advisory Committee on Pesticides and the Farm Animal Welfare Council also appear to be doomed.

But the bigger picture is what happens to the big budget agencies and commissions which effectively run much of our countryside.

The fates of the Environment Agency, Forestry Commission and Natural England, for instance, are all under review.

Each plays a huge role in the stewardship of the countryside. And if they are drastically cut back, or even axed, the immediate question will be: what body, organisation or department takes over their responsibilities?

Among those waiting nervously to see where the axe will fall are the conservationists.

There's growing concern that, at a time when hospitals and schools face dire economic challenges, using public money to protect wildlife and habitat may not be regarded as a priority.

Organisations such as the RSPB are warning that any major cuts for programmes which, for instance, pay farmers to improve the environment and promote wildlife would have a disastrous impact for decades to come.

Dr Mark Avery, the RSPB's director of conservation, said: "We have been arguing very strongly that the natural environment is not the place to make swingeing cuts.

"Defra's budget amounts to just half a penny out of every pound the government spends, yet that modest investment brings huge returns in the form of wildlife, clean air and water, flood alleviation, carbon sequestration and pollination.

"Such things are beyond price and their loss would be too high a price to balance the books."

The government has so far not given any indication of how cuts might affect rural areas.

Defra has been ordered to look for savings of £162m.

It said this would be achieved by measures including limiting recruitment and reducing the number of non-permanent staff, IT efficiencies and cuts to rural development agencies.