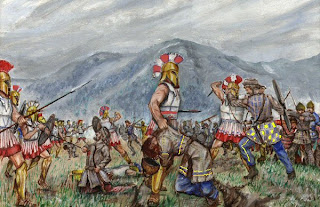 EXETER CITY COUNCIL ELECTION SEPTEMBER 2010
THE BATTLE OF THE GRECIANS
"ΜΟΛΩΝ ΛΑΒΕ"
(Come and Take Them)
The Battle of Thermopylae of 480 BC set an alliance of Greek city-states against an invading Persian army.

Though vastly outnumbered, the Greeks (Spartans) held back the Persian advance until the Greek army could regroup.

(The Grecians is also the nickname of the Exeter City FC who play in Red & White).

EXETER THE BATTLE OF EXETER 2010

On 9th September 9th the Labour Party in Exeter will emulate the great battle Thermopylae by taking on the might of Exeter Tories and their Coalition allies the Liberal Democrats, in hand to hand fighting in thirteen keenly fought by-election Council seats.

To the victor the spoils of war could be the control of Exeter City Council. Presently, the Coalition forces control 16 seats to Labours 8 (and real Liberals 3).

Hopes run high of even mighty St Davids wall's falling to the might of Septembers Red Army.

The Greek phrase "Μολών λαβέ" ("molon labe", or "come and take them"), a quote attributed to Leonidas at the battle, has been repeated by many later generals and politicians in order to express an army's or nation's determination to not surrender without a battle
at Friday, July 30, 2010