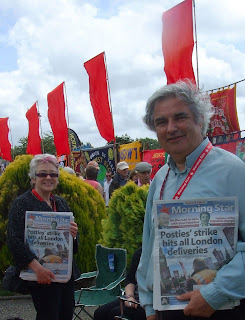 Nick Matthews warns that the left has ignored the decline of Rural Britain for far too long.

Every summer I like spend some time visiting delightful rural spots to listen to fiery radical speeches on the labour struggles of the past.

It's a pilgrimage to thank those who came before us in building our movement.

Many of you will also have travelled to places such as Tolpuddle in Dorset, Burston in Norfolk - home of the famous strike school - or Burford in the Cotswolds to mark Levellers Day.

There was a time when the left held its own in rural areas and had something to say to rural communities. The Country Standard informed people of the struggles of working-class rural dwellers.

With the collapse in house prices and economic changes generating huge increases in food prices, it is time for us on the left to think again about rural life and the agricultural sector.

The government has yielded too much ground to the Countryside Alliance. We have been led on a huge wild fox chase over country sports while missing out on the real debate over the future of the land over which the chases take place.

Agricultural policy may be the property of the European Union, but this does not mean that we have to give up thinking about the shape and type of agriculture we should have in Britain.

Each year, Co-operatives UK publish an overview of the co-operative economy and a table of the top 100 co-operatives. At least half of them are agricultural co-ops.

The retail Co-op itself began farming in 1896, when it bought its first farm to grow spuds for its stores. A big expansion took place between the wars when food was scarce, so it should be no surprise to find that the Co-op is Britain's largest farmer. It works a total of 70,000 acres across England and Scotland.

Today, at least 10 agricultural co-ops have a turnover of more than £100 million. There are some real giants, such as the Dairy Farmers of Britain Co-operative with 2,000 farmer members and a half-a-billion pound turnover.

This in some way reflects the consolidation of the sector due to the severe challenges the agricultural economy has faced over the last few years. Poor prices and terrible weather have put farm incomes under massive strain.

The collapse in rural farm work has contributed to pressure to close rural schools and post offices. But there are still around 135,000 workers employed in agriculture in the UK.

In fact, the Unite union's Rural and Allied Workers Trade Group continues to represent workers with the Agricultural Wages Board as well as in the growing sectors of horticulture and forestry. They have their work cut out in some areas, dealing with issues such as migrant labour and gangmasters which would have been familiar to Thomas Hardy and the Tolpuddle Martyrs well over a century ago.

In the face of all these problems, co-ops and social enterprises could play a massive role in protecting the rural economy. The Plunkett Foundation, which provides seed corn finance and advice to support the start-up and development of rural co-ops and social enterprises, shows how this can be done. Its support helps the growth of small-scale businesses such as community shops which big business is simply not interested in.

Successive British governments have pursued a policy of managed decline, reflecting their attitude towards the manufacturing and agricultural sectors in Britain.

The Department for Environment, Food and Rural Affairs seems to believe that Britain will be able to import huge quantities of food from the mouths of the developing world forever.

However, with global warming affecting production, the issue of food security will soon become a real one.

We will soon face having to put more land under cultivation and tackle issues such as low-carbon agriculture, organic farming and animal welfare, as well as the impact of climate change on soil quality.

British agriculture is a vitally important asset to our country and it needs to be expanded and developed, not sentenced to lingering death under the EU common agricultural policy.

Other important places/dates in rural history

The Eastern Counties Agricultural Labourers & Small Holders Union was established at a conference at the Angel Hotel, North Walsham, Norfolk on 20 July 1906.

In 1910 major strikes and disputes broke out in the Norfolk villages of Trunch, Knapton, and St Faith's (Norfolk)
at Saturday, July 25, 2009