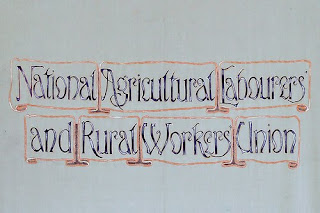 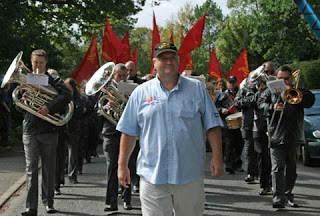 The Burston School Strike, at Burston, Norfolk lasted from 1914 to 1939 and was the longest strike in British labour history. It began when teachers Kitty Higdon and her husband, Tom Higdon, were sacked. Soon the school's children went out on strike in support of their teachers. An alternative school was built, financed by donations from the labour movement, which continued to teach pupils until 1939.

An estimated two thousand trade unionists, socialists and progressives (including a group of Woodcraft Folk Children from their Suffolk holiday hostel) joined the parade led by the Paseo Malanga Carnival Band. A large YCL and CP contingent marched, red flags flying through the Norfolk countryside behind a brass band from the Rail, Maritime & Transport Workers (RMT),

Speakers at the annual Burston Strike School Rally 2009 celebrated the 50th anniversary of the Cuban revolution and expressed solidarity with the people of Honduras. Luis Marron, political counsellor from the Cuban embassy, gave a rousing speech that prompted a rush of people to the Cuba Solidarity campaign’s stall, where many signed up to become members.

Luis said that as his own parents were teachers, he knew the terrible state that Cuban education was in before the revolution and that if it had not been for the revolution, Cuba would have needed many of their own Burston strike schools. Luis reminded the crowd that with the continued existence of the Guantanamo Bay detention camp, the illegal blockade, and the incarceration of the Miami five, we cannot rush to thank the Obama administration for a change in its policies towards Cuba that it has yet to undertake.

Steve Hart, a speaker from the South East Region Trade Union Council (South East Region TUC), urged the US government to end the illegal blockade of Cuba and declared his solidarity with the people of Honduras and its elected president “who are showing such tremendous courage when facing the guns of the junta." The Latin American feel of the event was enhanced by children dancing to the rhythms of Cuban salsa in carnival outfits.

Speakers also addressed issues around the recession as G20 finance ministers gathered in London to prepare for the main summit in the US later this month.

Union Assistant General Secretary Diana Holland said: "At times of depression like this, we need more than ever the principles of solidarity shown at the Burston Strike school."

She rejected government suggestions that, in time of recession, Britain could not afford workers' rights or equal rights.

Mike Pentelow former editor of the "Landworker" (the agricultural unions journal) and contributor to Country Standard also spoke at the rally.

The crowd wished veteran socialist Tony Benn, who had been due to address the rally, a speedy recovery from the operation which prevented him from attending.

Good weather and a fantastic response from the crowd ensured that Burston 2009 marked another successful YCL intervention at a labour movement festival this summer.

For Peace & Socialism in the Countryside 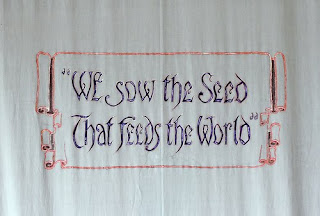