The Connaught Rangers Mutiny in India For Irish Freedom 1920 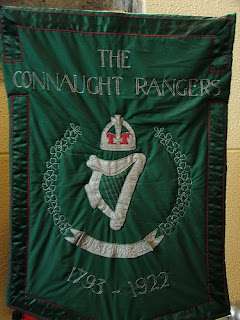 
The 88th Foot or Connaught Rangers were raised in 1793 to meet the perceived Napoleonic threat, it later fought in the Peninsular Wars against Napoleon. Crimean War, Sudan, Boer War and many other conflicts.

"It's a long way to Tipperary"

At the beginning of World War One, the Regiment arrived in Boulogue, France in August 1914, as part of the British Expeditionary Force. It was here that a British national newspaper recorded the Regiment marching while they sang the musical hit "It's a long way to Tipperary", a song that would forever be associated with the Connaught Rangers and World War One.

The Regiment saw service at the Somme and at Gallipoli, losing over 2,500 during the Great War.

But events at home were changing rapidly. The Easter Rising in 1916, its ruthless crushing and subsequent execution of it's leaders fuelled the demand for Irish nationhood.

A bloody War for independence ensued, begining in January 1919,

The British Government responded to the escalating violence in Ireland with increasing use of force. Reluctant to deploy more regular British Army troops, it set up two paramilitary police units to aid the Royal Irish Constabalry (Police).

These "Auxiliaries" some seven thousand strong, were mainly ex-British soldiers demobilised after the Great War. First deployed to Ireland in March 1920, most came from English and Scottish cities. the "Black and Tans" soon won a reputation for drunkenness and indiscipline, burning down the houses and killing those suspected of aiding Irish Republican's.

By the summer of 1920, the atrocities of the Black and Tans in Ireland (especially in Galway, Kerry and Cork) were becoming widely known. The Irish soldiers serving in the Connaught Rangers in India were receiving letters from relatives at home describing what was happening. In many cases, British atrocities visited their own families.

It was at the British military barracks at Jullundur, on the plains of 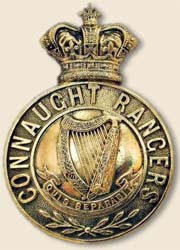 the Punjab, that the mutiny began. Here was based the 1st Battallion of the Connaught Rangers.

On the 27th June 1920, Private Joseph Hawes of Kilrush, County Clare, asked his companions what they were going to do about the situation in Ireland.

While on leave in Kilrush in 1919, Hawes had witnessed the beginning of the War of Independance and the banning of all public meetings and GAA games, including a hurling match prevented at bayonet point in Kilrush. Hawes learned later that his brother had joined the IRA.

"We’ll soldier no more for England,”

The Irishmen in Jullundur decided to refuse to obey the orders of their officers. “We’ll soldier no more for England,” Hawes told them.

The men’s protest was passive at first "sit in", they volunteered to be locked up in the guard-room. But the mutiny spread quickly and Hawes and his comrades were joined by 400 others at Jullundur.

When the colonel addressed the men and recounted all the battle honours of the regiment, Joseph Hawes replied:

“All the honours on the colours of the Connaught Rangers are for England. There is none for Ireland, but there is going to be one today, and it will be the greatest honour of them all.”

The mutineers elected a committee, took over the barracks and hauled down the Union Jack. The Irish Tricolour was raised the tall flag mast of the regimental quarter guard by Private Frank Geraghty of Castleblayney, County Monaghan. The Irish tricolour also flew on every single barrack. Most of the Irish soldiers were singing patriotic ballads in the barracks. Two hundred miles away, another part of the regiment was based at the hill station of Solan. There the mutiny was led by Private James Daly (22), of Tyrellspass, County Westmeath.

Daly led a company of men who paraded outside the officers’ mess and he addressed the officers saying the parade was a protest at British atrocities in Ireland. Daly is alleged to have stated "If you want to know who the leader is, I am"

The men refused to obey the officers’ orders and demanded the release of two soldiers who has been arrested after bringing the news of the mutiny from Jullundur.

More men joined and, on 30 June, after an attempt to capture the fort’s magazine, the men were fired on and Privates Patrick Smythe of Drogheda and Peter Sears of Neale, County Mayo, were killed, another, Private Egan although getting a bullet through his lung survived.

The shootings at Solan marked the end of the mutiny

It had never had a definite objective but was a spontaneous protest by Irishmen sick of soldiering for England and desperate to show their support for the Irish people.

Seventy-five of the mutineers were rounded up and held in harsh conditions at Dagshai Prison. This resulted in the death of Private John Miranda of Liverpool. In September, the mutineers were court-martialled in Dagshai in August 1920.

The court-martial sentenced 14 men to death and the remainder to terms of 10 to 20 years in prison; 13 of the death sentences were commuted to life imprisonment.

The one death sentence confirmed was that of James Daly.

On the morning of November 2nd 1920 Private James Daly was led out into the prison yard and executed by a firing squad.

“It is all for Ireland. I am not afraid to die,” he wrote in his last letter to his mother.

Apart from dying for his country he also made history by becoming the last member of the British Army to be executed for a military offence.

The British Army tried to hush-up the mutiny and news of the execution of James Daly was naturally eclipsed by the death of Terence MacSwiney on hunger strike a week before and the execution of Kevin Barry a day before. But, like them, Daly gave his life for Ireland. 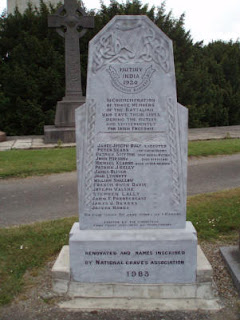 The mutineers were transferred to jails in England and the last of them was released in 1923 and returned to Ireland.

The Connaught Rangers had been disbanded the year before (1922).


A Connaught Rangers Cenotaph was unveiled in Glasnevin cemetery in 1949.

John Miranda , A fourth mutineer, an Englishmen, died in prison in India, he was born in in Liverpool to a Spanish mother and Irish father. His remains are still in India. Surely he deserves honouring in the same way the brave Irishmen were.

Joseph Hawes the aged 77, was present at Daly's reinterrment and pronounced him to be "as brave a man as ever stood before a firing party."

Reuters Report on the Connaught rangers Mutiny
from Simla, stated


The men “refused to do duty on the ground of the alleged wrongs inflicted on Ireland.” “The situation is happily well in hand, and only a section of the regiment is affected. The trouble (Reuter adds) began at Junllundur, where half a battalion is stationed, forming the British garrison.

The men involved represented to their commanding officer that they were no longer able to serve, but they were quite prepared to draw their pay. They appear to have been respectful and intimated their willingness to give up their arms to any British troops sent to relieve them.

They have since been disarmed, and over 200 are under guard. The Seaforths and the Welsh Regiment are now at Junllundur.

They were promptly fired upon by their comrades two being killed one wounded. The others were at once arrested.
END

Based on an article in Irish Sunday Tribune, History Ireland and Republican News by Michael Mac Donncha

To the tiny homesteads of the West
The recruiting sergeant came
He promised all a future bright
So the brave young men went off to fight
For the empire and her might
And many's the victory they had won
Many the hardships they had seen
They fought and died, side by side
Their enemies they had defied and for a foreign king