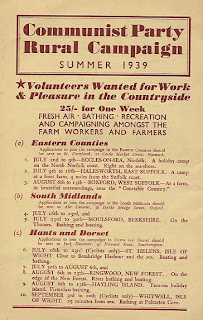 in the Rural Areas

The Eastern Counties District Communist Party organised a week’s campaign in the agricultural area of Norfolk at the end of June 1938. When planning the campaign, we regarded it as experimental, and we had some doubts in our minds as to the results.

How would the agricultural workers receive the Communist Party? Would they be scared of us, or suspicious? Would they greet us with indifference?

These were questions which worried us before the campaign began.

The actual experience of the campaign proved conclusively to us that there was no cause to be worried with questions of this sort. Our propaganda met with a very warm response from the workers. We met with suspicion and sour looks from only a very few people; the majority of the people, both men and women, were eager to hear what we had to say, and to buy our literature.

The countryside of Norfolk, which we selected as our campaign area, represents the best organised rural district in Britain.

The campaign organised by our Party was modelled on the Clarion Campaign. We set up a camp in a central place, whence we sallied forth into the villages every morning, afternoon and evening.

It was our original intention to hold a meeting every evening in one of the small market towns. But we quickly gave up this idea, as we found it much better to concen- living all sorts of odd-job people, to whom it is much harder to make any definite appeal.

Meetings in market towns during the actual market are not a good idea. Everyone is very busy, and you tend to interfere with the real business of the day. As soon as we arrived in a village we played a tune on the loud-speaker, and then addressed the people. We made it our main aim to sell the Party’s new pamphlet, “ A Plan for Britain’s Agriculture,” and distribute the leaflet.

The meeting we regarded mainly as a publicity medium for drawing people’s attention to our literature.

In our one week’s work we sold 1,077 copies of the pamphlet in 50 villages. That is an average of 20 copies per village—and 20 copies of our pamphlet in a small village means a very great deal.

The literature was sold by house-to-house canvass. The people displayed great interest, and we had some very valuable conversations on the doorstep. It is worth reporting that at several houses we were mistaken for fascists, and told, very roughly, to clear off. As soon as we explained that we were Communists, we met with a very different reception, and often sold a pamphlet at such houses.

Immediate quick results from Such a campaign are hardly to be expected, especially as this was the first time any of the people had come in contact with our Party.

However, we have had one or two instances since the campaign, showing that an impression had been made by our work.

One farmer came up to us and said that our pamphlet was the best thing he had read. He had not bought it himself, but a friend had given it to him—showing how a pamphlet sold will travel about in a village. Then one of the Norfolk Labour Party officials was stopped on the road by a worker who was waving a copy of our pamphlet in his hands and talking enthusiastically about it.

Finally, it seems that in one small village two or three farmers had a little conflab together about our leaflet, and gave their judgment that it was “ nine-tenths correct.” of course they would not agree to say “ ten-tenths correct,” since farmers hate to commit themselves to anything.

This type of work is tremendously important. And with the existing mass discontent in the countryside against the National Government, exacerbated as it has been by Chamberlain’s speech at Kettering, we must drive our work hard into the rural areas, because the basis is there to smash once and for all the Tory grip upon agriculture.

We must build our Party membership and influence in the countryside. But in order to do this the Districts and Branches in the towns must carry on campaigns from the towns into the villages.

“The report by Maurice Cornforth of experiences in the Eastern Counties of England (published in the August 1938 issue of Party organiser) shows us what can be done by a large contingent possessing the equipment for a large campaign. His final paragraph reads:

“ We must build our Party membership and influence in the countryside.

But in order to do this the Districts and Branches in the towns must carry on campaigns from the towns into the villages.”

A short stay in agricultural Lancashire during August convinced me of the truth of this conclusion. Here we had no loudspeaker van, and only the occasional use of a car, which made a door-to-door canvass the only means of approaching the village people.

The Ormskirk division of Lancashire offers a different agricultural problem from the Eastern Counties. There are many market gardeners, rather individualistic in out-look, and the living conditions of the agricultural labourers are somewhat better than in the South. Hence it was necessary to concentrate on a national agricultural policy, and issues of local government.

But the greatest obstacle to propaganda is the lack of political consciousness, aggravated by the past experience of a “ Labour “ M.P. who is now to be found in the (National Labour “ camp.

This varied literature made it possible to approach every sort of house with a lively appeal; for as Maurice Cornforth pointed out, there exist in the larger villages all sorts

of odd-job people for whom an agricultural pamphlet has little personal interest.

And interest was not lacking.

There can usually be found, in village and hamlet alike, sufficient support to form the beginnings of good active groups—but until they are well entrenched in village life they need all the guidance and assistance that our district Parties can offer.

We know that we can interest village folk in political events if the approach is made properly. Our sales results show it.

The Rufford comrade, over a period of months, has sold hundreds of Strachey alone, quite apart from other matter of agricultural interest. For country people who have read Strachey, what is most needed now is real activity to draw them into the open, and the Party ought to make this activity its main task.

On the negative side what was brought home to me was the frequency of replies like this: “ Oh, they’re all the same; they promise anything now, but as soon as they get into Parliament. . . .! “

This attitude arises, apart from their M.P.’s political acrobatics, from the narrowness of Labour’s appeal in the past, and can only be removed once again by continuous activity—as distinct from mere election activity.

And then there is the position of the country woman. We have all met the housewife who treats us like carpet salesmen. This is understandable, but we also received several answers in this style: “ Well, there are no menfolk about, and I’m not concerned with suchlike,” or “ No, I don’t interest myself in politics at all.” This creates a special problem for women’s work in rural areas, and needs very careful consideration in their activity.

But how can we obtain this all-round activity? In Rufford there has been formed a discussion circle, but mass propaganda remains impossible without the aid of our town Branches.

In Lancashire, where the agricultural areas are rarely more than 20 miles from the industrial towns we have unequalled opportunity for this work. Can we make our aim for next year a mass campaign on the lines of the Eastern Counties’ District?

“It is all the old man can do”

This was said of an old age pensioner of 79 years who lives in a Wiltshire village near Salisbury. “ All he can do “ is to deliver, every day, rain or shine, five copies of the Daily Worker which come into the village for the agricultural workers.

We hope we shall be doing as much when we reach that age.

These readers will be meeting together shortly for the first time to hear a statement by Jack Dunman, Hampshire and Dorset District Organiser, and it is confidently expected that a new group of the Party will be the result.

At any rate, the “ Tom Mann of the countryside” has promised to be the first recruit.

Some days ago in a Dorset village 10 miles from any town, a meeting was held to celebrate the 22nd Anniversary of the Revolution, composed of rural workers and their wives.

A statement on the lessons of the Revolution was listened to with great attention, and a decision taken to hold fortnightly meetings in future.

Here also there will be a rural group of the Party in a very short time.

Fresh Air, bathing, recreation and campaigning amongst the farm workers and farmers.

What is intresting in these articles is how much the Communist Party based its campaigning on the early Clarion movement's attempts to spread socialism into rural areas. This would have been based on the experiences of some of those who would have undoubetdly heard, if not participated in those original Clarion "propaganda tours".

The Youth section (Young Labour) of the New Zealand Labour Party used similar tatics in its 12 day "Clarion Road Tour" during the General Election of 2005. During which they carried a12 metre long banner headed “Your future, your call".
at Thursday, July 23, 2009