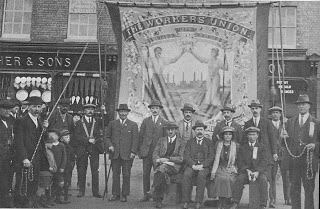 Florence Saward (centre of picture) was the daughter of an agricultural labourer from Braintree, Essex

Saward became a Workers Union organiser in Essex and Suffolk around 1913 and as the Chelmsford Chronicle stated (10 December 1938) "came to prominence " during the 12 day Braintree Courtaulds Silk Mill girls strike in November 1913 and the Witham Silk Glove girls strike which started on 27th February 1919.

She was also involved in Workers Union and later TGWU activities in London and Portsmouth and also the Labour Party in Essex and Suffolk.
at Sunday, August 28, 2016