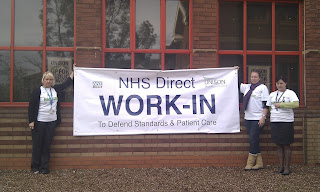 UNISON nurses and health advisors in the South West are taking action to highlight the threat to the services currently provided by NHS Direct.

Nursing and Health advisors providing NHS Direct helpline services to Cornwall and the South West based at Exeter are today (1 May) holding a ‘work-in’ in protest against the Government’s plans to replace NHS Direct with a service that has not been properly evaluated.


From midnight last night until to midnight tonight, NHS Direct staff in Exeter are staging a ‘work-in’, with extra staff voluntarily coming in, in their own time, to help staff the NHS Direct phone lines. The protest is over the roll out of the 111 service which will replace NHS Direct. The union is deeply concerned that the roll out has not been properly evaluated, and could compromise the level of out of hours service that patients receive, as well as pile extra pressure onto other NHS services such as A&E and GP surgeries.


The main centre is at Exeter, but they will be joined by nurses and health advisors from Bristol, Plymouth, Torquay, Taunton and Truro. During that time, they expect call rates to increase between 10% and 13% tomorrow.


“UNISON nurses and health advisors will be taking action on Mayday today, to urge the Department of Health to stop the roll out of the proposed 111 service until it has been fully evaluated.


“UNISON is particularly concerned that the new 111 service has fewer nurses available to take calls and therefore unqualified staff will be unable to carry out vital clinical assessments. This will inevitably lead to a huge increase in accident and emergency department attendances, ambulance call outs and patients referred to GP surgeries.


“We fear that the increase volume of patient turn-up at the regions A&E departments will push many to breaking point. We estimate up to 50 extra patients a day could present themselves to A&E departments and 1,000 extra ambulance call outs. We’ve also looked at the costs involved in replacing NHS Direct with the new 111 service and estimate the costs will run into millions of pounds; not to mention the cost to the quality of services provided.


“The reduced scope of the new 111 service also means that vital dental and contraceptive advice will be discontinued as will services to those suffering mental health problems from patients engaged in self harm or depression.”


“I am concerned the NHS will fail some of our patients with mental health issues. We have been very successful in organising our training and using the experience of senior nurses in order to provide a range of help and support. I don’t think this has really been considered by those planning and implementing the new 111 service.”


UNISON remains concerned that services to rural communities will be seriously affected by the move as those with injuries or young children will have to travel hundreds of miles to receive advice and treatment, advice that could have been provided by phone by a qualified trained nurse.

UNISON and other health organisations such as the BMA are calling for a pause in the implementation of the 111 service in order to consider the implications for urgent out of hours care as a whole.


The South West is the first location where action is taking place to highlight the concerns in the changes from the NHS Direct service to the 111 service .There will be further action in NHSD (NHS Direct) sites around the country.

Because 111 lacks qualified nurses to do Clinical assessments it will result in:-

An extra 50 patients a day at every A and E