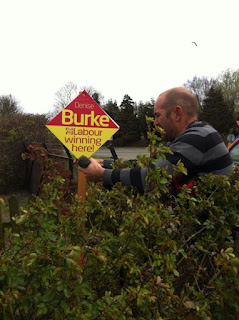 The People's candidate for Waterside,

Local community activist Denise Burke, from Happisburgh, North Norfolk has been chosen to fight the Coalition candidates in the forthcoming North Norfolk District Council by-election in the Waterside ward.

Denise has a proven track record of community activity in the area and has already fought for improved access to local services through better public transport, reduced fares for young people, cheaper car parking in town centres and sustainable tourism.

She is no stranger to local politics having worked in local government in Peterborough and for the Mayor of London. She has led the development of many different childcare and youth schemes, and has been a chair of school governing bodies for 25 years. In her spare time she volunteers at the Happisburgh Lighthouse and sings in the Coastal Parishes Choir.

She added: “I believe in getting the best for North Norfolk’s rural and coastal communities for all those who live, work, and visit here. This will mean creating more local job opportunities for our younger and older residents, and committing to the continued protection of our local environment too.”

Speaking to supporters in Waterside ward, Denise said: “This is a two horse race between Labour and the coalition parties, and I believe Labour can win in Waterside and make a real difference.”

Denise currently runs an organisation with her husband Stephen, United for All Ages, which brings older and young people together in new ways. She also recently set up a website, goodcareguide.co.uk, which helps families to find and review childcare and eldercare.

The Waterside by-election will take place on Thursday 26th April 2012 and was called following the resignation of Lib Dem Cllr Simon Partridge.