David Cameron, Rebekah, Raisa - But Who's Mucking Out The Stables 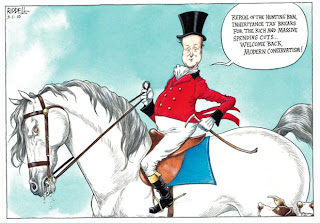 But no, he never mucked out the horses, (or Murdoch's stables) and no he never knowingly tipped the staff.

The denial and attempted cover up is reminiscent of MP's cash for questions and in particular the Tory MP's "Duck House".

Meanwhile, Gideon Osbourne our part time Chancellor prefers to go skiing in Klosters as a guest of his multi million pound banking chums. However, once the young Gideon (to the manor born) strolled around the country pile killing peasants.


Remember "were all in this together"