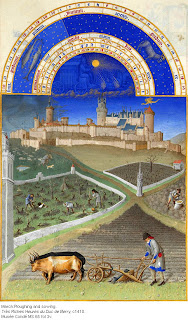 The "Vision of Piers Plowman'' and its author


Between about 1360 and the end of the century three versions of the "Vision of Piers Plowman" were written. There has been some dispute among experts, as to whether the three versions each had a different author, but opinion now seems to be settling down to accept William Langland (c. 1330 ? -c. 1386) - "Long Will" as he calls himself - as the sole author.

What we, know about the author is derived from what he says about himself in the poem. He seems to have been a West of England man, educated perhaps at the Priory of Great Malvern in Worcestershire, a daughter house of Westminster Abbey. If so he lived in an area which was dominated by the great church land owners, of whom the wealthiest were the Bishop of Worcester, the Cathedral Priory of Worcester, and the abbeys of Evesham, Pershore, Tewkesbury, Winchcombe. and Gloucester. In the Severn valley, one could see the medieval church in all its-glory and with all its faults.

But this was also an area of artistic and cultural activity. Many late medieval poems -were written in the West Midland dialect. The stained glass of Malvern and Warwick rivalled, that of York, And although there was no West Midland school of painting and illumination to-come near that of East Anglia, the architectural splendours of the area were outstanding, as can still be seen by those who care to visit what is left of the great abbey churches and other medieval buildings.

Like almost all literate people, Langland was in church orders. Since he was married he had not got even as far as the order of sub-deacon, but at any rate he was tonsured. By the time he wrote his poem he was living in London, and earned his living by visiting the houses of the well-to-do and saying prayer's for the living and the dead.

Since the Fourteenth century England contained over a thousand town and village clubs (or gilds) whose primary, if not only, purpose was to finance such prayers, it is obvious that Langland's occupation was' generally considered necessary, though he himself was rather ashamed of it.

Two things stand out in his poem? the intensity and sincerity of his religious feeling and his close contact with the everyday life- of ordinary people. He is usually regarded as a mystic, that is, as a man expressing what he considers to be a religious experience resulting from direct contact between himself and God. In the poem, through the description of a series of, visions which he experiences, he portrays a search for the right way to salvation. Since I am not as familiar with medieval Christian mystical writings as I am with the records of economic and social life, I hesitate to make any pronouncement about this side of his; poem. However, I think it is worth while emphasising that the mystic's search for the right road to salvation could, in the circumstances of those days, be somewhat of a rebellious act.

The organised church stood on guard over every single man's and woman's thought and actions. , It laid down exactly how salvation was to be obtained. Its priests and its sacraments were the only possible means by which man and God could come together. Heretics and mystics who ignored the organised church in their quest for God were often lumped together and treated as rebels both by church and state. Hence, even in the most mystical (the later) parts of the poem, Langland reflects uneasiness and dissatisfaction with the cut and dried religious - and therefore social and political - order of the day.

It is the earlier part of the poem which appeals most to the ordinary reader. In this Langland shows that if a mystic, he was still a most acute observer of the social evils of his time. He knew all about poverty, for his work was poorly paid. He also knew all about the hypocrisies of the rich whose soul's he was paid to pray for. And as a Londoner by adoption, he knew a good deal about, the sordid politics of the court in the later years of the reign of Edward: III - on the eve of the great rising of 1381.

The poem does not contain sharp individual character portraits such as those in Chaucer's "Canterbury Tales". All the persons in Piers Plowman personified virtues or vices, a common device in medieval didactic and cccrical literature - Holy Church, Theology, Flattery, Conscience and so on.

The poem begins with the author's vision of the world, of the "the field full of folk"', which he sees from the Malvern Hills on a May morning.

It is a vivid satirical description of the hubbub of medieval society, particularly its seamy side - and no less vivid for its allegorical setting. The main target of his satire is the church;

"lf the bishop, were holy and worth, both his ears,
he would not send his seal to deceive the people
But against the bishop the Pardoner preaches not
For the parson and Pardoner share the sermon silver
Which the parish poor would get if the Pardoner were away......"

Like innumerable critics of the most important single institution of the middle ages he cannot hut see the contrast between the wealth and political ambition of the church and the poverty and simplicity of its origin. Therefore, it is the corruption of wealth, whereby man's duties are neglected for self—advancement, which is his constant preoccupation.

The most vivid of the early sections deal with the marriage and trial of the Lady Meed, that is, the personification of material rewards

of whom Holy Church says';

"....she oft hath harmed me ,
She hath slandered my love that is named Loyalty
And belied her to lords that have the laws to keep.
In the Pope's palace, she is private as I...."

Meed's.attempted marriage to Falsehood (whose mistress she had been for 40 years) and the king's attempt towed her to the knight Conscience, lead Langland to make a number of sharp criticisms of the Court itself. And as a matter of fact such criticism, was in the air, for the -"Good" parliament of 1376 attacked all the corrupt court circle around the moribund Edward III.

In contrast to the stifling corruption of wealth and pleasure, Piers Plownan first appears as the personification of those virtues which will lead man to Truth. Piers later appears again as the symbol of Christ himself in the more mystical parts of the poem. At first, however, the interpretation of his position is not difficult. He is all that is good in the active life of this world. The honest labourer, the peasant on whose back the whole world lives, is nearest to God and the most suitable person to lead men to God.

"I know Truth", he says, "as well as scholar does his book
Conscience and my own wit led me ,to his place,
Made me, his man to, serve him evermore;
I will show you the way home."

Before he leads mankind on, he has to plough and sow his half-acre, and so all classes are put to work as they wait—and if they do not work are scourged, by Hunger.

There are many puzzles about this poem - the disappointment of Piers with the enigmatic Pardon he earns by his labour, for example. But indeed., every chapter of visions is crammed full allusions both to contemporary, social and political life and to the religious 'meanings of the mystic behind even allegory itself.

Therefore, in a short note about the poem one can hardly do more than mention one thousandth part of the whole. Bourgeois scholars have written innumerable books about it, and I am certain that a proper Marxist study of it would reveal immensely more that they have missed.


There is, however, one point of importance that I have mentioned in "The English Rising of 1381", How does Langland fit in with the revolutionary movement? I think writers such as Jusserand ("Piers Plowman, a contribution - the history of English mysticism") are correct when they say he was not a revolutionary as John Ball, another churchman, was Langland accepted, the church's picture of society as it should be and mercilessly attached deviations from that ideal. But the ideal sanctified the class divisions of feudal society

continued but not available