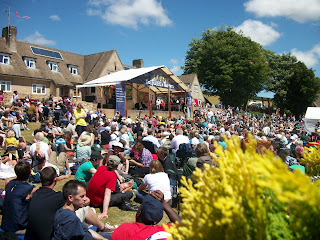 By PRSD, on Wednesday, July 6, 2011
Peoples Republic of South Devon

An Australian trade unionist due to take part in the annual rally to commemorate the Tolpuddle Martyrs, who were deported for forming a trade union, has herself been deported.

Maureen Lum, from Tasmania, arrived in the UK last Sunday for a long-planned holiday and was due to sing some of her own songs with the Grassroots Community Choir at the festival in Dorset.

However, immigration officials at Stanstead Airport deported for not having a performers’ visa. The fact that Ms Lum was not being paid to come or for her performance did not sway officials. She was put on the next flight back to Tasmania.

The Tasmanian Grassroots Union Choir is a group of music lovers dedicated to ensuring that workers songs, old and new, are being sung and heard in Tasmania. They were due to perform a special series of songs about one of the Tolpuddle Martyrs, George Loveless, who was exiled to Van Diemen’s Land, as Tasmania was then called.

Liz Forster, from the choir, said: “As a member of the Grassroots Union Choir, we are all very upset by this unfair treatment. Maureen is the author of several of the songs that we will be singing. She does it as a statement of solidarity with other unionists. We are sad but know not what to do.”

Nigel Costley, South West TUC regional secretary, said: “You would have thought that after 170 years things might have moved on.

“The Tolpuddle Festival is more than a rally for trade union members; it is a celebration of working people’s culture. We were delighted when the Grassroots Union Choir agreed to come and perform. It strengthens the bonds between our nations and between union people.

“The petty and vindictive attitude of immigration officials might mean there is one less voice in the choir but the thousands of people attending the festival will sing out strongly in her place.”

This year’s Tolpuddle Martyrs’ Festival takes place from July 15-17 and the camping places have already sold out.

(from a press release)