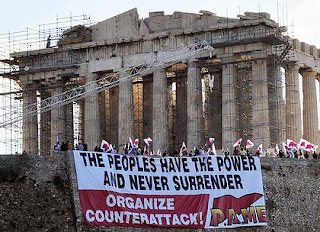 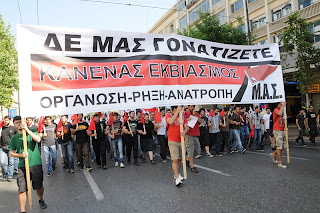 A big nationwide mobilization which started (27th June 2011) with the 48-hour strike continues today at the second day of the strike with the class oriented forces playing the leading role.

The flags of All Workers Militant Front (PAME) waved in workplaces, enterprises, construction sites, ports, public authorities. Thousands of workers responded to the militant call of PAME. The strike has succeeded! Self-employed, poor farmers, pensioners, immigrants and students were there too.

Hard Battles took place at the gates of the factories and the ramps of the ships in order to picket the strike and make the capital feel the power of the working class where it hurts most, as it happened yesterday that hundreds of thousands took part in the strike.

During the dozens of demonstrations held throughout the country thousands of protesters voted unanimously against the measures in streets and squares.

The working people reject the new anti-people measures, refuse to become slaves of the plutocracy. We should note that the new anti-people measures reduce wages and pensions, increase further retirement ages and indirect taxation from 13% to 23%, strike a blow on social security and the list of hazardous occupations, increase the daily unpaid working time, establish particularly low wages for young people, abolish collective labour agreements, establish the temporary contracts which entail dismissals without compensation, reduce “social” benefits etc. In addition, they privatise companies, land, water supply services, ports, airports etc that were owned by the state in order to bring money to the state funds and pay the debt, as they claim themselves. Nevertheless, the reason is that they want to hand over new sectors of economy to the capitalists in order to invest their over-accumulated capital.

The workers and the popular strata defied the intimidations and participated in the yesterday morning’s strike demonstrations as well as to the dozens of demonstrations that took place yesterday afternoon. Today they continue their struggle which is a significant legacy for new struggles, for the escalation of the struggle. The vast majority of the protesters who participated in the strike demonstrations held in 65 cities of the country demonstrated with the flags of PAME and not with the so-called “indignant citizens” or with the leaderships of the yellow unions GSEE-ADEDY.

The Executive Secretariat of PAME saluted the hundreds of thousands of strikers who fought decisively for the strike. At the afternoon of the first day of the strike PAME organised a massive demonstration in the centre of Athens which extended up to the parliament. The strong picket lines of the demonstration prevented small provocateur groups from setting up provocations with the aim to dissolve the demonstration.

Although hundreds of thousands of strikers struggled dynamically for the strike, which succeeded in all over the country, although streets and squares flooded by the demonstrations, the international TV media showed the activity of the provocateurs as if it was the main issue in Greece and hardly spent a few seconds for the strike. This is their allegedly objective information! We have to do with a massive scale operation for the distortion of reality in Greece, that intends to conceal the resistance, the struggle and the demands of hundreds of thousands of working people.

The Press Office of the CC of KKE noted in its statement: “quite accidentally” the various groups of the hooded persons appear during the strike demonstrations with the police riot forces. This fact is one more evidence that enables the people to see that the movement which the system and the repressive mechanisms are afraid of is the movement in the factories and the enterprises, the movement of the working class that gives a perspective to the people. The class oriented workers’ movement knows how to struggle and protect itself from the provocateurs. The struggles continue undiminished.

Furthermore, the Executive Secretariat denounced the stage-managed games of some dozens of hooded individuals with the police riot forces because they seek to slander the workers’ struggles, intimidate the working people and the youth and prevent their participation in the strike demonstrations. PAME called on the workers to defy them and give an organised answer to the provocative action of these mechanisms through their mass participation in the demonstrations.

In an interview at MEGA TV channel on 28th June Aleka Papariga, GS of the CC of KKE, underlined that the activity of the hooded individuals “benefits the government too” and added that “there are many cores both within and outside the government at each time or others created by relative mechanisms that utilise these incidents or even create them”. Talking about the possibility of bankruptcy in case that the parliament does not adopt the anti-people measures of the government the GS of the CC said:

Bankruptcy is a fact. Perhaps now they agree on the conditions or the distribution of the possible losses among the creditors.” Aleka Papariga called on the people to struggle for the disengagement of the country from the EU and for parallel radical changes in society and economy.

2nd day of the strike

At the second day of the strike PAME along with PASEVE (Nationwide Antimonopoly Rally of the Self-employed and the small Tradesman ), PASY (All Farmers’ Militant Rally ), MAS (Students' Militant Front ) and OGE (Greek Women Federation) held mass strike demonstrations in 65 large cities of the country.

In Athens the demonstration took place in Omonoia square. A delegation of the CC of KKE headed by the GS Aleka Papariga participated in the demonstration. Afterwards followed a march in the streets of the city that ended to the Omonia square where the protesters stayed till the voting of the package of the new anti-people measures which was adopted at the afternoon by the parliamentary majority of PASOK, with 155 votes. The parliamentary group of KKE voted against the measures as a whole and headed towards the demonstration of PAME where Aleka Papariga extended a greeting stressing the need to continue the struggle for the overthrow of the anti-people choices of the government, the capital and the EU.
Part one


“The People have the power and willnever surrender. Organize - Counterattack” was the slogan written in Greek and in English on the banner that the all Workers’ Militant Front (PAME) hung from the Acropolis on 27th June 2011, on the eve of the 48-hour strike against the barbaric anti-people measures of the social-democratic government, the EU and the IMF that starts on Tuesday 28th June and is expected to affect every workplace.

Early in the morning hundreds of members and supporters of PAME carried out a symbolic occupation of the Acropolis raising two huge banners. This initiative of PAME had a very positive impact not only on the Greek working people but also on the tourists who were visiting the country and the Acropolis.

Importantly, access by tourists to the Acropolis was allowed within the framework of the symbolic occupation of the forces of PAME.

PAME notes in its statement: “We call on the working people, the youth, the unemployed and the women to a carry out a people’s uprising. We struggle along with the peoples all over the world against the capitalist barbarity. The barbaric measures that lead the people to bankruptcy must not pass”.

In the afternoon the forces of PAME organised placard protests and mass rallies-in order to conduct propaganda for the strike-in many neighbourhoods in Athens as well as in other cities in Greece.
at Friday, July 01, 2011