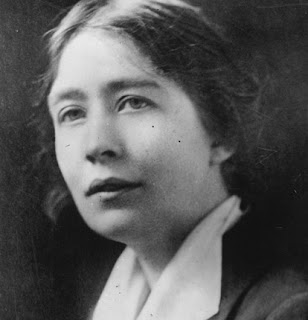 I was fourteen years of age and my sister, Christabel, two years older (1896), when we joined the Manchester Clarion Cycling Club. For the next two years we rode with the club almost every Sunday. We knew, of course, all the Clarion people : Robert Blatchford "Nunquam," Montague Blatchford "Mont Blanc," "Dangle" A.M Thompson and Edward Fay (the "Bounder") and the rest.

We read them weekly and saw them sometimes. Edward Fay's funny articles in the Clarion were too funny for me, for I was never amused by the jokes which make most people laugh, only by the funniest things which happened, as it were, by accident. But when the "Bounder" (Edward Fray) came to stay with us we all liked him tremendously. He had that lovable quality which make one feel a man is an old friend when first one meets him. We were all very sad when he died. 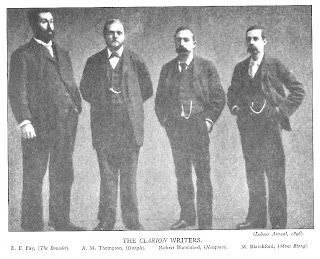 Mrs. Bennett, an active member of the Clarion Club, taught us to ride. The first time she led us into the main road I was surprised to find myself in collision with a pony and trap which met me from behind a furniture van. The pony's head struck me hard on the right arm and shoulder, and down I went with a bang. I saw stars. Mrs. Bennett took me into a little shop in Handforth, where my spill occurred, and gave me a glass of lemonade with a beaten up egg in it, and I rode on, forgetting my bumps.

We had a host of friends in the club. Haylock, the captain, and almost every member of the club helped me at some time or other in mending my punctures—I was fearfully unlucky in that respect—and in pushing me up the last little bit of the steepest hills. As the youngest member of the club, I doubtless got special consideration, but everyone was kind to everyone in that genial company.

The "Clarionettes," as they called themselves, were merry people ; their joyous cries of "Boots !" and "Spurs !" rang through the country lanes. Clarion slang was a fertile product, which amazed me, and which would certainly have shocked our father, who was a purist in the matter of speech, had we indulged in it.

Socialists, as a rule, were very keen and strenuous in those days, and the road to Socialism seemed by no means so long and difficult as it appears to-day, and most of the comrades, even the oldest, confidently expected to reach it in their own lifetime. The "Clarionettes" were much criticised by the ) I.L.P.'ers (Independent Labour Party) and the B.S.P.'ers (British Socialist Party) for not being sufficiently active and serious in Socialist work. I have often heard the cyclists reply by telling of the good work they had done in the past in sticking little red gummed labels with appropriate mottoes on trees and fences wherever they rode. This activity was before my time, and I wished they would revert to it, being myself of strenuous mind.

Yet, though they held only very occasional meetings of any sort, and did little direct propaganda, the Clarion people carried a leaven of Socialist conversation and argument into rural districts then wholly untouched by any Socialist or Labour propaganda. A copy or two of the Clarion, and perhaps some other literature, would generally be left behind. 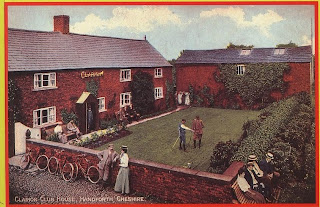 Week in, week out, the Clarion clubs took hundreds of people of all ages away from the grime and ugliness of the manufacturing districts to the green loveliness of the country, giving them fresh air, exercise and good fellowship at a minimum of cost. The clubs promoted a frank, friendly comradeship amongst men and women, then very much less common than it is to-day.

When I see a pair of pink legs flash by on the back of someone else's motor-cycle, I sometimes think that the owner of the pink legs is having a much less interesting journey than was ours on our humble "push bikes," noise less, and under our own control. The miss of the pink legs cannot afford a motor-bicycle of her own in most cases, and the push bike doubtless seems to her too slow in these rapid days, but I think we had the best of it.

At our journey's end was always an enormous shilling tea, in which phenomenal quantities of bread and butter and tinned fruit rapidly disappeared, then a walk round, and frequently afterwards a brief "sing-song," sometimes joined by members of other clubs who had ridden that way. Jack Ramsden, I remember, was much admired at Clarion functions for his singing of the "Lowland Sea," and Harry Lowerison bubbled over with tales and songs.

One of the great events of those days was the camp at Pickmere, in Cheshire, where Clarion people and other Socialists spent a summer holiday in tents, and maintained relays of poor little children from the slums of Manchester and Salford—the Cinderella children, as Blatchford had named them. 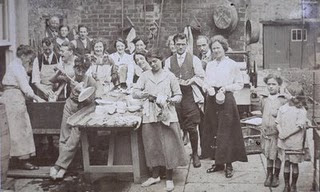 A great factotum in the camp was "Billy de Bulwell"; his real name I have forgotten. De Bulwell was the nick-name he assumed as a joke, because he had been born in Bulwell. Swarthy as a Spaniard, grimy as a coal-heaver poor as a church mouse, he was ever ready with a bitter jest at the expense of riches and aristocracy. He was kindness itself to the children and had the gift of making the naughty ones "good as gold.". (Ed believe "Billy de Bulwell" is in the picture above at Handforth on left - certainly fits Sylvia's discription)

"Chaise" was so called because the members of the club fancied in him a resemblance to a racing cyclist of that name. He was a great favourite, full of fun and antics and always willing to peel "spuds," wash "pots" or carry loads.

Many a puncture he has mended for me. It was pleasant when the campers sat on the grass in 'the evening taking turns to talk and tell tales. I remember old Mr. Wadsworth telling us that as a young lad in dreary Salford he had become a Socialist through studying butterflies; the loveliness of the insects had bred in him a desire for beauty also in the human world.

One of the women members who never rode, but helped with the children and the general work of the camp, was regarded, I think, by all with special affection. Tolerant, gentle and selfless, we knew that she was dying of consumption, but no word of complaining ever escaped her lips. She did not live long, but she outlived the most beautiful and popular girl in the club—one of those rare beings whose society everyone seeks. Behind her death was the common tragedy of pinching scarcity in a working-class home where wages are small and life hard, as it was in those days even more than to-day.

The Handforth Clubhouse was an ambitious undertaking. We all looked forward to its achievement. My father took shares in it for us all. I have some of them somewhere to this day.

Before the clubhouse was established we had ceased to ride. My mother and Christabel went to Switzerland for a visit. During their absence my father was suddenly taken ill. He died before my mother could return. Christabel stayed in Switzerland for a year; for my life had become far too serious and too anxious to leave room for cycling. That was the end of our membership in the Clarion Club, but afterwards, when I came to London, I wrote for some time a weekly article in the Clarion.

I ceased to write it only because the growing demands of our East London Federation of the Suffragettes, editing its organ, The Women's Dreadnought, and the intermittent hunger strikes I had to endure under the "Cat and Mouse" Act at last made it impossible to fit in the Clarion article.

Quotes and Notes from Sylvia Pankhurst -The Suffragette Movement states

"Thenceforward every available day was spent in cycling. though the journeys were often too long for me, and I could scarcely pedal the last miles, the Sundays with the club were pleasant. it was delightful to be out in the country away from the grime of Manchester"

Sylvia and her family attended a Clarion camp where "Crowds of young men and women, generally rather ostentatious in their love-making, in what was then the Clarion way, came down there, and parties of "Cinderella" children were brought in relays for a week's holiday. She noted that Robert Blatchford was also in attendanc.

The first meeting of Manchester Clarion Cycling Club was held at the Labour Church Institute, 3 St John's Parade, Deansgate, Manchester on Wednesday evening next, the 16th January 1895, at 8 p m.