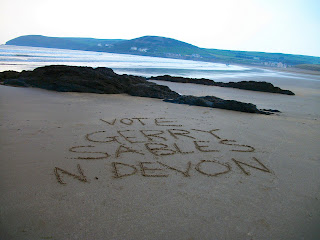 All 3,700 electors have now received the election address of the "Progressive" candidate standing in Barnstaple Central ward.

These will be the ninth and tenth elections he will have fought in; the first was back in 1979.

Following on from a town council bye-election in the same ward last July where he got 6% of the vote in a fight with Libdem and Tory candidates for one seat Gerrard is hopeful of a higher vote. In the District Council there are two Tory, two Libdem, one Labour and one Communist. Labour has not stood in this ward since at least 1995 and the candidate last stood where he lived in Braunton

. He has not replied to a letter asking why the communist should ask voters to put an X against his name as well as the communist's.

The Town Council election is more interesting. The local Libdems seem to have a personal dislike of the incumbent Tory. The Libdems have four candidates. The Tories have the one. Then there is Gerrard Sables. The Libdems are sure to get three candidates through but they want all four and they don't want the Tory.

It is understood that at least three of the Libdem candidates are asking their supporters to give the fifth vote to Gerry Sables "Progressive" and avowed communist. The coalition is not operating at local level.

Each voter has also recieved a copy of the People's Charter.