75% of the Public (and Daily Telegraph) Oppose Forests Sell Off 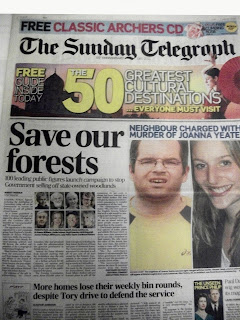 The Sunday Telegraph today has a front page article highlighting the growing opposition to the Con/Lib Dem Government plans to sell off OUR Forests. In today's poll 75% of the public oppose the sale.

"There are some things that are too precious to be thrown on the mercy of the open market".

Country Standard has been implacably opposed to the sell of England's great Forests and support the local campaigns against the Sales.

Our ships were British oak,
And hearts of oak our men.

Save our forests, say celebrities and leading figures

Leading public figures, including the Archbishop of Canterbury, have called on the Government to reverse its decision to sell off publicly owned forests.

The Government has announced its intention to sell off 15 per cent of all land owned by the Forestry Commission in the course of this parliament in the hope of raising as much as £100 million
Photo: ALAMY
By Robert Mendick, Chief Reporter 9:00PM GMT 22 Jan 2011

In a further setback for Mr Cameron, an opinion poll published yesterday found that 75 per cent of the public opposed the plans.

The Forestry Commission owns about 620,000 acres of land in England, including the New Forest, the Forest of Dean and parts of Sherwood Forest. The Government has already announced its intention to sell off 15 per cent of all land owned by the Forestry Commission in the course of this parliament in the hope of raising as much as £100 million.

A consultation launched this week by the Department for Environment, Food and Rural Affairs (Defra) will put forward plans to sell off the remaining 85 per cent. A clause has been inserted in a new Public Bodies Bill that will give the Environment Secretary permission to transfer ownership of all the land.

The campaigners’ letter states: “We, who love and use the English forests, believe that such a sale would be misjudged and shortsighted.

“It is our national heritage. We are an island nation yet more people escape to the forest than to the seaside.

“Our forests nurture countless species of native plants and wildlife. We have relied on them since time immemorial yet we are only a heartbeat in their history. We who know the value of the forests fear that over time, the public’s access to them will be limited and their protection, eroded.

“We, the undersigned, believe it unconscionable that future generations will not be able to enjoy the guarantee of a public forest estate.

“The Government should remove the three ill-conceived clauses from the Public Bodies Bill, and suspend any significant sales, until the public has been fully consulted.”

Campaigners warn that selling off public forests will lead to woodland being destroyed and not maintained, and the public being barred from access to land. They fear that some sites may in time be vulnerable to developments such as housing estates and golf courses. Save England’s Forests’ president Rachel Johnson, the writer and sister of London mayor Boris Johnson, said: “An extraordinary coalition of the Great and the Good has responded to the Government’s proposals to sell England’s forests. The diverse and distinguished signatories of our letter could stand as the mouthpiece of the nation. Our message, in no uncertain terms, is that the Government cannot rush through legislation that will change our English countryside forever.”

Other signatories to the letter include Hugh Fearnley-Whittingstall, the celebrity chef; Joanna Trollope, the author; Lady Helen Taylor, the daughter of the Duke and Duchess of Kent, and Richard Briers the actor.

A spokesman for Defra insisted no decision had been taken on the wholesale sell off of Forestry Commission land, although he admitted that the status quo “was not an option” in the consultation.

With the Government preparing to sell off some of Britain's forests to the private sector, campaigners have highlighted the case of Rigg Wood in Cumbria as a sign of things to come.


The padlocked gate tells its own story.

The main entrance to what was once a popular picnic and walking site in the heart of the Lake District is closed. Campaigners say the public have effectively been shut out.

Rigg Wood, a 40-acre (16 hectare) site by the banks of Coniston Water, was sold for £116,000 in October. Many local residents only learned of the sale when they noticed that the small car park at the site had been closed by its new owner.

Now campaigners are warning that Rigg Wood's fate will become a familiar tale if the Government presses ahead with plans to sell off forests throughout England.

Paul Townsend, the chairman of the Save Lakeland's Forests group, said: "What has happened here is a symbol of what could happen if forests are sold.