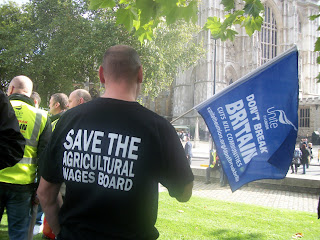 Agricultural workers' union Unite warned the government today to reverse its decision to abolish the Agricultural Wages Board or face possible legal action.

The decision to axe the board as part of the coalition's vicious "bonfire of the quangos" last week could condemn 150,000 rural people to a life of poverty, the union said.

Unite believes it has a strong case for judicial review of the abolition, citing the government's failure to consult the Welsh Assembly adequately on the legislative changes.

Whitehall only allowed the devolved administration a one-week consultation period.

"Since the government's original announcement of abolition of the AWB in July, there has been no consultation whatsoever with farm workers, or with farmers.

"The coalition government's actions and the haste with which they are moving are therefore legally questionable," he said.

"We will apply to the courts to get abolition put on hold if the coalition continues to ignore calls for consultation.

"The coalition has completely failed to carry out impact assessments or to test the fairness of this measure, steps which were promised for all legislation. This headlong rush to abolish the AWB is reckless folly and Unite will do all in its power to prevent this serious mistake being made."

Mr Waddell also predicted dire consequences for rural workers' pay and conditions if the board was not brought back into operation.

"Without the statutory floor of protection which the AWB provides for workers, wages will be slashed and tens of thousands of rural families will be forced into poverty. Where is the fairness in that?" he asked.

Alongside possible legal action, Britain's biggest union has also pledged to build a cross-party coalition in Parliament to oppose legislation to finalise the AWB abolition.

Progressive rural magazine Country Standard leader-writer Chris Kaufman pointed out that wages and conditions in the countryside were already "miserable" but the absence of the AWB will lead to grinding poverty for many workers.

Highlighting the skilled nature of the work performed by agricultural labourers, Mr Kaufman warned of massive labour shortages in the countryside if wages were not raised.

"Farm workers are in the main highly trained in the skills to operate machinery worth many thousands of pounds and to tend livestock which is equally valuable," he said.

"With an ageing workforce, over half of farm workers over age 50 and a quarter over 60, this will lead to a labour crisis."

"The Con-Dem government are playing fast and loose with the UK's future for its food security and the rural economy.

"We must now build an irresistible coalition to defend rural workers and the countryside economy."