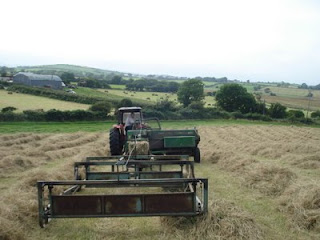 Forced Off The Land

Somerset tenants pushed off land as farms sold off by Tories

Conservative councillors in Somerset have delivered a shock blow to the county's farming community by agreeing to sell off Somerset County Farms. The move could force many tenant farmers off the land, out of business and out of their homes.

The idea of county farms was developed following the smallholdings and allotments acts of 1907 and 1908, where all councils were placed under a statutory duty to meet the demand for applications by young persons to enter into farming. This was further strengthened by the agriculture act 1947 which laid out a duty for county councils to provide smallholdings to offer people "an opportunity of becoming farmers on their own account."

Somerset county council's move will roll back over a century of support for young people in rural areas. It also comes at a time when local agricultural colleges, like Cannington in Bridgwater, are reporting a huge increase in interest for farming courses.

Ben Smith from the Somerset county farms tenants' association farms 125 acres near llminster. He runs a dairy herd and employs a trainee.

"We first heard about this two months ago when farms coming to the end of their tenancy received notice to quit. There's normally a paragraph offering the opportunity to apply for another term, but this paragraph was missing."

There was no consultation and Somerset tenants have now been told they can apply to buy the land, but this means getting valuations and mortgage advice, with very little time to do so. The effect on where Ben farms will be huge.

"Out of 60 farmers on the estate I imagine only three would be able to afford to buy their farm. I'm lucky I have over five years left, but that's not that long in farming terms and it's taken a vast amount of money to get started.

"I borrowed £ 176,000 to buy cows and machinery, as well as putting in £15,000 of my own money. The loans are paid off over the length of the tenancy, which means I won't really earn anything out of the farm I've worked on for 10 years. If I can't stay here at the end of the tenancy there will no where for me to go. Buying land is not really possible.

"I'm a first generation farmer. I trained as a bricklayer, but ended up as a herdsman for 15 years before taking on a county farm."

Ben has joined other tenant farmers at recent council meetings to protest about the move,but despite support from many countryside campaign groups, the council is still pushing ahead with the planned sell off.

Where is the NFU and Countryside Alliance - Missing !!

NOTE
The right wing Tory leader of Somerset Council Ken Maddox has refused to increase the Community Tax and therefore his desire to sack 1,500 workers and sell off the "vast majority" of Somerset's farms to Tory friends, the big land owners.

Tory leader Maddox states "We have now completed the latest phase of that farm-by-farm review and of the remaining 60 farms it is clear that the recommendation will be that the council should retain around one third. Of the other two-thirds that the review concludes we could sell, the majority of tenants have expressed an interest in purchasing some or all of the farm holding. The next phase of the review will see detailed consultation with the farmers - this is an on-going process and no formal decision has yet been taken.

I'm also really interesting in talks we have been having with larger farming concerns such as Crown Estates to gauge their interest in buying the remainder."