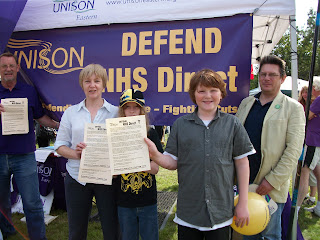 U-TURN OVER CLOSURE OF NHS DIRECT

³This is great news for patients and for staff at NHS Direct. The service that NHS Direct offers is tried and tested and is of great value to the public, as the outcry over the threat of closure shows. The service provides a reassuring voice for worried parents in the middle of the night and is a well of advice that the public can tap into 24 hours a day, especially those in rural communities. Andrew Lansley should not have put nurses and staff in fear of their jobs in this way

³I am sure staff will still be confused and worried that the Government may have another change of heart. I would like a guarantee from the health minister that the 1,300 nurses working for NHS Direct will still have a job there this time next year.²

³This sounds like fantastic news and a victory for common sense. It shows the effectiveness of the Unions campaign against the threat to axe NHS Direct. There has been a real groundswell of opposition from the public, with thousands of people signing a petition against the closure.

³The service employs 3,400 NHS dedicated specialist nurses and professionals and provides expert help - taking more than 27,000 calls a day. It successfully takes the pressure off the emergency services and from busy GP surgeries.

³However, I think we still need to be vigilant. I want to hear more detail of Andrew Lansley¹s announcement today, to make sure that staff and the valuable service they provide, are truly protected in the longer term."