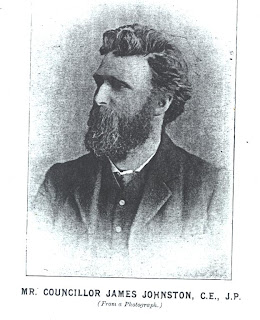 Born in Jarrow his father was a coal trimmer.
James Johnston began work aged 11, he undertook engineering classes and rose to the position of chief enginner at a Glasgow Ironworks.

In 1885 he was the Labour candidate for Jarrow,

He was a founder member of the Independent Labour Party (ILP),

James Johnston established Macclesfield Independent Labour Party in 1894 and was the ILP branch Chairman from 1894 until 1903.


He was very active in the Clarion movement and was President of Macclesfield Clarion Cycling Club, he became a prominent Clarion "Vanner" speaker.

"in the summer of 1896 he spent several weeks with the Clarion Van, visiting the towns and villages in Shropshire, and speaking at open-air meetings in advocacy of collectivism."
Manchester Faces & Places" January 1899.


Extra information from Withington Co-operative Party blog
at Tuesday, May 12, 2009