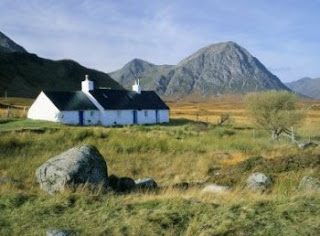 About 20 years ago, I was accused by a leading member of a London-based left party of "rural cretinism."

This obscure post-1905 quote from Lenin was a criticism of the move my family had made from Glasgow to a Scottish island.

It assumed that socialist agitation, in the wake of the miners' defeat and life in Thatcher's Britain, was an urban matter, concerned with chasing the dwindling industrial working class.

If this argument was an insult to rural socialists then, it is a nonsense now.

In the past 10 years, the Scottish Socialist Party has extended the influence of socialist ideas throughout the length and breadth of the country.

Even now in the wake of a damaging split and electoral reversal of fortune, there are active branches from Shetland to the Borders and out to remote islands such as Arran.

Under such circumstances, it is important that socialists engage in the debates that take place in rural and remote Scotland and inform them with socialist argument.

Socialists uniquely have an analysis of the present banking crisis, which of course affects everything in the economy, wherever you are in the world.

Agriculture and farming are beset by problems associated with a global market system dominated by agribusinesses and supermarket chains. Between them, they squeeze farmers out of business and force productive practices that make ecological and effective land management impossible.

Farming in Scotland employs about 70,000 people directly and several times that number indirectly.

The answer lies in a different type of locally based system of production and distribution, not a reform of the EU Common Agricultural Policy that brings new bureaucracy and crazy systems of subsidy.

The encouragement of production for local co-operative distribution, as with the farmers' markets that are gaining popularity, could challenge the Tescos and Asdas.

At the same time, the Co-op, which is already present in many rural areas, could support local shops and business through its distribution networks.

It is a similar story in forestry - a business, mostly still state-owned, that uses 17 per cent of the land in Scotland and employs some 12,000 people.

'Our forests are too valuable an asset for increasing carbon capture and improving quality of life to be put out to the market.'

The SNP proposals to privatise 25 per cent of Forestry Enterprise areas - the most profitable - to gain income for tackling climate change were successfully resisted on the basis that this is confronting the issue from the wrong perspective.

They have now been dropped by the Scottish government.

Our forests are too valuable an asset for increasing carbon capture and enhancing quality of life for all of us to be put out to the market.

Rural life is being strangled by shortages of social housing and a market system that has regarded rural homes as speculative investment opportunities rather than a right for the people.

In some communities, most of the houses available are either second homes or holiday accommodation. Sometimes local people get access in the winter months only to be turned out for the summer season.

These same areas lose schools, shops and other amenities and people left in them year round find themselves isolated with poor public services.

This can be reversed by a house-building programme and investment in infrastructure. Free public transport would reduce dependency on privately owned cars - an unfortunate essential in many areas of Scotland.

With its natural resources of wind, wave and fast-running rivers, Scotland could lead the world in local energy production and self-sufficiency.

Instead, we are the victims of policies designed to meet Kyoto quotas on renewable energies within a marketplace dominated by the giant private energy companies.

Large wind farms in remote places that send energy hundreds of miles, losing much of it in the process, are no more an answer than developing more nuclear power stations - an idea that is gaining dangerous currency just now.

There is plenty of space to absorb more people and a welcome should be extended to those escaping misery, for whatever reason, elsewhere in the world.

It is also time to end once and for all discrimination against our oldest ethnic minority, Scottish Gypsy travellers, and help them retain their culture and identity.

Policies should encourage diversity and language difference so that Gaelic and lowland Scots are not lost in a mid-Atlantic monoculture.

There are sparks of hope. The community buy-outs of land in Gigha, South Uist, Knoydart and several other places have encouraged innovation and regeneration. Sadly they are dependent often on wealthy benefactors and the willingness of the landlord to sell.

The ruination and depopulation of Scotland's landmass by generations of largely absentee landlords should be reason enough to put their interests last and make land nationalisation more than just a slogan.

Land issues have been the trigger for protest and struggle for hundreds of years and deserve as much of a place in socialist histories of Scotland as do the great industrial battles.

These are just a few ideas and the SSP remains committed to furthering the debates around rural issues.