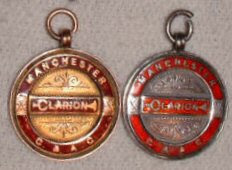 
I desire to call to the attention of Manchester and District Cycling 'Clarionettes' to the advertisement on page 4 calling a meeting for all who are interested in joining a strong Clarion Cycling Club in Manchester.

It was a change that created the strongest and most active Clarion cycling club achieving a membership of 150 as early as 1895, and 300 by the end of 1897. As Clarion cycling burgeoned during the up to the end of the century, Lancashire and North Cheshire proved to be the key areas.

From the huge following in the Manchester district, to the Clarion cycling clubs in smaller towns such as Hyde, Farnworth, Horwich, Tyldesley, and Newton-le-Willows, a socialist cycling movement game meant months the working populations of the mill towns and the other industrial and commercial communities that lay in close proximity to the fresh air and freedom of some exhilarating open country.