The Manchester Clarion Cafe at 50a Market Street, Manchester was part of the wider Clarion Movement. It was opened by Robert Blatchford editor of the Clarion newspaper on Saturday 31st October 1908.

According to Harry Pollitt, the Cafe was the work of "skilled men from eighteen trades built decorated and furnished"..."The salon was imposing with a Dutch fireplace and ceiling lantern....the Clarion cafe was lit by ships lantern's and the walls decorated with oak panels. 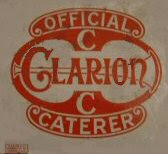 William Morris's "A Kings Lesson" was pictured in a frieze by the great artists Bernard Sleigh (1872-1954). the windows had coloured glass figures representing Justice, Knowledge, Progress and fraternity.

On the floor above the Clarion cafe was a large and luxurious Clarion clubroom, with murals by Walter Crane.

The Clarion cafe in Manchester soon became a meeting place for socialists and labour people and regularly frequented by Harry Pollitt. 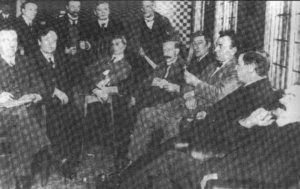 Picture above of the Clarion Cafe, 50a Market Street, Manchester November 1913. James Connolly extreme right and American Trade union leader "Big" Bill Haywood next to him.


Denis Pye has written a history of the Manchester Clarion Cafe.
at Saturday, February 14, 2009