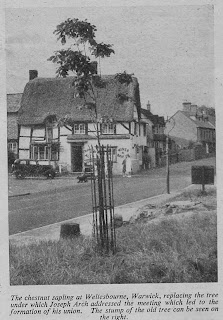 The Chestnut tree in Wellesbourne, Warwickshire where Joseph Arch held the first union meeting in 1872.

Left the new tree planted in 1950 (picture from the August edition of the Land worker the Journal of the National union of Agricultural Workers.

Below a picture from a National Agricultural Labourers Union certificate. Joseph Arch called a meeting on 14th February 1872. Expecting fewer than thirty in the Stag's Head public house in Wellesbourne, however it was so well attended that it had to be held outside under the chestnut tree in the village. 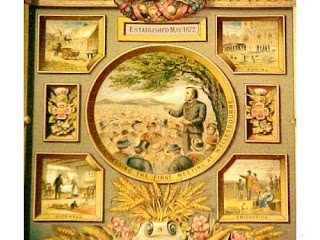 When Arch arrived he found over 2,000 agricultural labourers present to hear him speak, on a dark, wet, winter night, the labourers holding flickering lanterns on bean poles to illuminate the proceedings.

in his autobiography Arch describes the scene:

"In the flickering light of the lanterns I saw the earnest upturned faces of these poor brothers of mine — faces gaunt with hunger and pinched with want — all looking towards me and ready to listen to the words that would fall from my lips. These white slaves of England with the darkness all about them, like the children of Israel waiting for some one to lead them out of the land of Egypt" 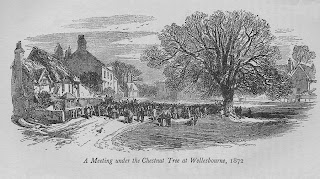 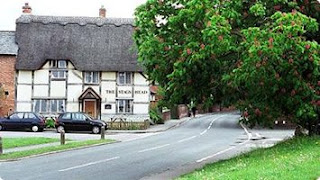 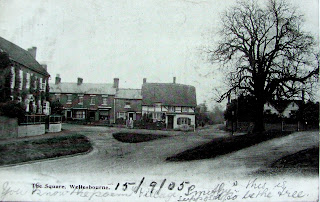