Sarah Reddish was an active suffragette and socialist

Sarah was born in Bolton in 1850, left school at the age of 11 to work at home with her mother, a silk weaver. Her father was librarian and secretary to the Bolton Co-op Education Committee

She later went on to work as a winder and reeler in the textile mills and eventually she became a forewoman in a hosiery mill.

she worked for the causes close to her heart the Co-operative movement, women's votes, Socialism and it was her faith in socialism that led her to join the Independent Labour Party and the Clarion Movement, such a great public speaker and advocate for socialism was she that she travelled with the first women's Clarion van tour of 1896. 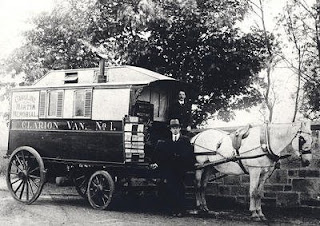 The idea of Clarion Women's Vans was put forward in the newspaper early in 1896. Female volunteers toured the country in them, holding open-air meetings, selling Socialist literature and handed out leaflets.

Clarion Van no 1 was named after Caroline Martyn (1867-1896), a well-known Socialist lecturer and the woman said to have founded Glasgow's first Socialist Sunday School. Caroline Martyn spoke with Kier Hardie at a huge ILP and Clarion gathering at Hardcastle Crags in May 1896 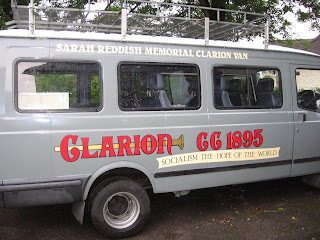 Her interest in Co-operation led to the founding of the Bolton branch of the Co-op Women's Guild and she was the President of the Branch of the Guild branch for more than 20 years.

She was the first women on Bolton Education Board 1899 and the first women to stand for Bolton City Council in 1907. While Sarah never married she found time to found and organise a well known and respected "school for mothers" in Bolton. 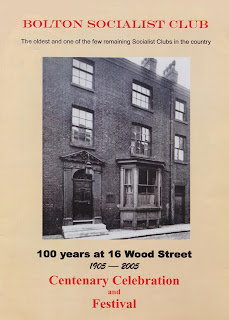 In June, 1898, Sarah Reddish, a Bolton Socialist active in the Co-operative Women's Guild, who had become well-known as a socialist speaker after touring with the famous Clarion Women's Van, wrote to the Clarion as Secretary of West Ward Indpendent labour Party (ILP).

She declared that they were prepared to fuse locally with the Social Democratic Federation (SDF) Branch, which was also willing.

'Division means weakness', she wrote. 'We want strength for useful work and therefore we hope that other local comrades will join us.'

In September, 1898, the fusion took place at a meeting in the Palatine Buildings on (now McDonalds) where Bolton SDF Club had by then moved.

Bolton Socialist Party, open to members of either national grouping, or of none, adopted a set of Principles and Objects which remained on the membership application form until it was replaced by those of the British Socialist

Party in 1912.(later the Communist Party)

In November, 1899, Bolton Socialist Party moved the Club to number 13,

Street. Its entrance is still there in the narrow alley which runs behind Waterstone's Deansgate shop. Here they were next to the Home Rule or Sinn Fein Club with

whose members, mostly from the town's large Irish community, they had strong

ties. But there were more ambitious plans already under way for building a big

Socialist Hall with Clubrooms and its own offices.

This idea was not unique to ; other towns already had, or were planning, their own Socialist Halls under the encouragement of Julia Dawson, the women's columnist in the Clarion. Among these towns were Salford, Oldham and . The original Prospectus for Bolton Socialist Hall Limited (the Industrial and Provident Society which still exists) offered £1 shares to Bolton Socialists to raise £4,000 for the grand new building. Until it was ready, the registered office would be in Derby Ward ILP Club, .

The Prospectus is signed by W. Alex Seaton of , who became the National Clarion Cycling Club's official photographer and moved to studios in , Bury. Most of the others on the Management Committee were also Clarion people.

Meanwhile, the social, cultural and propaganda activities continued: indoor and outdoor public meetings every week, dances, tea-parties for poor children (provided as part of the Clarion 'Cinderella Fund' work encouraged by the Clarion paper); sports, field-days and picnics at Harwood, Rivington and Anglezarke.

Billiard and 'ping-pong' (table-tennis) tables were purchased, as well as a punch-ball and 'Sandow' muscle-developers. Cycle runs every Saturday and Sunday (and sometimes on Wednesday evenings) left from from March to October. On the political side, support was given to the Clarion horse-drawn propaganda van when it visited the town and faced the usual harassment from the Council and the police. A Clarion Scouting group was set up to carry out the chalking of pavements with Socialist slogans, fly-posting and literature selling. A choir (Bolton Clarion Vocal Union) rehearsed weekly to perform at public meetings.

A Socialist Sunday School was established for the children, teaching a non-sexist version of the Socialist Ten Commandments, which was printed on a post-card sold at the Club. For two years (1902-1904) they had their own monthly paper.

Connlly, who addressed audiences in the on Sunday 28th July,

1901. In the afternoon, his theme was 'Labour and Revolution', and in the evening

The Economic Causes of Irish Misery'.

At the time of the coronation of Edward VII in 1902, with the streets of the town illuminated and decorated, members of Socialist Party, led by Sarah Reddish, protested at a Town Hall meeting that the money lavished on the celebrations should have been spent on food for the poor. All this, and when election time came round genuine Socialist candidates, of whatever party, were given unstinting support.

At the end of 1904, the members of Bolton Socialist Party were still intent, after more than four years of effort, on raising enough money to build the Hall of their dreams. Over the Christmas and New Year holidays they held yet another Sale of Work. Tom France, Sarah Reddish and Alex Seaton were the openers. The Bolton Journal reported that the takings were satisfactory, 'hastening on the day of the opening ceremony of the new hall'. In February, the Committee was discussing sites. Deansgate, where old properties were being demolished in the place where Whitaker's is today, was considered. But they soon realised that they were being hopelessly over-optimistic. Nowhere near the necessary amount of money had been raised, and by May the Party was asking Bolton Socialist Hall Limited to purchase 16, , offering to pay a mutually agreed rent. The lease on the rooms ran out at the end of September, but the tenant of the property was prevailed upon to leave early, and so the Socialists moved in at the beginning of October, 1905.

The purchase price was £800, of which £600 was borrowed on mortgage. The Party agreed to pay a rent of £42 per annum, plus rates and taxes, and to keep the property in repair. A steward and stewardess, Comrade Blyto and his wife, were appointed at 25 shillings (£1-25) a week, with free accommodation. It was decided that the bathroom could be used by members (most of them had no bathroom at home) for a charge of two pence - hire of towel threepence.

It appears that, with little ceremony, all the political, social and cultural activities got under way again in the premises. In 1906, Bolton Socialist Party supported a Women's Suffrage delegation to the new Liberal Prime Minister, Henry

Campbell-Bannerman. It was made up mainly of textile workers, and included

At this time unemployment was a major concern and the comrades

campaigned tirelessly in weekly meetings for action from central

and local government to alleviate its effects, stressing always that Socialism was the

only real answer. Meanwhile, at the Club, it was laid down that any unemployed

could satisfy the barman's questions. (These are not specified in the records!)

use the premises. The front room on the ground floor was theirs rent-free (the bar was on the first floor.) Educational classes took place in the evenings, and included Economics, Sociology and Esperanto, among a wide range of other subjects. The biggest halls in town were hired for public meetings the Temperance Hall (which held 2,000) the Spinners Hall, the Hippodrome Theatre on Deansgate (opposite the Post Office), the Co-op Hall on Bridge Street, the Grand Theatre and Theatre Royal on Churchgate. Thousands of song-sheets were printed for these meetings; choirs and soloists joined the audiences in the singing of Socialist anthems, always including Edward Carpenter's 'England Arise."

Profits to subsidise other activities were boosted by the sale of "Red Rag Toffee' and "Socialist Cigars' to augment the door takings. Celebrity speakers were booked to attract these large audiences, pulled in by advertisements in the Corporation Trams huge posters on hoardings and, in the football season, notices carried on sandwich-boards among the thousands outside . The biggest draws of all were the young Victor Grayson, elected MP for in 1907, on a straight Socialist ticket and who married a Bolton woman, and Tom Mann, who returned from and in 1910, preaching industrial unionism and the General Strike to bring about the Social Revolution.

The Bolton Party was still committed to Socialist unity in the face of increasing sectarianism. By 1910, in addition to the Labour Party (mainly trade unions and ILP) there were: the Social Democratic Party (the former SDF), James Connolly's Socialist Labour Party, and the Socialist Party of Great Britain. The SDP called a Socialist Unity Conference in in October, 1911, and among the delegates were two from Bolton Socialist Party. As a result, the British Socialist Party was formed (mainly out of the SDP, with some dissident ILP-ers). The Bolton Party became a branch of the British Socialist Party until the First World War period In 1912 Jim Paulden was elected Secretary of the Party and Club (he also became Secretary of Bolton Socialist Hall Ltd.) He was to retain these positions until 1969.

As the First World War approached, seemed to some to be on the brink of the long-awaited Social Revolution, with waves of strikes and the spread of syndicalist ideas like those now held by Tom Mann, which rejected parliamentary and electoral activity in favour of the General Strike. Bolton Socialist Party was still taking all comers, despite their British Socialist Party affiliation. A group of syndicalists was allowed to join after they had explained their ideas to the Committee.