A Brief History of Clarion Choirs

A brief history of the Clarion Choirs and Clarion Vocal Union.

Montague Blatchford (brother of Robert Blatchford) wrote a series of articles on choral singing in The Clarion, and as a result of these articles singing classes and choirs were formed in different parts of the country.

By the middle of 1895 more than a dozen of these choirs had been formed, and Montague Blatchford had become leader of the Clarion Vocal Union movement nationally.

His stated object was 'to encourage unaccompanied vocal music performed creditably and with understanding'.

By far the biggest local group was in his hometown, Halifax, where by 1895 there were 146 members plus an 'elementary class' of 48, and an orchestra.

The average weekly attendance for rehearsals was 120, and Montague Blatchford (known as "Mont Blong") was teacher and conductor.


It was in South Lancashire and the West Riding of Yorkshire that the Clarion Vocal Unions or Choirs, like the Cycling Clubs, took deepest root; and soon they were eager to arrange inter-club meets. 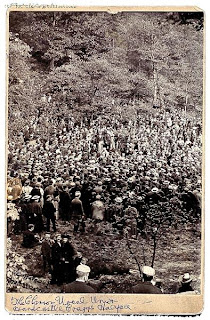 Hardcastle Crags, a beauty spot near Hebden Bridge in Yorkshire, not far from the border with Lancashire, 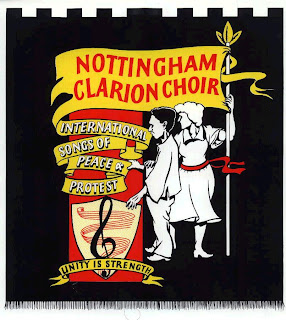 Hardcastle Crags became a regular venue for CVU picnics and outdoor concerts. At the first of these gatherings, on Saturday 1st June 1895, there were present about a hundred Clarion members, with 150 relatives and friends. Many came on their bikes, proudly wearing the new silver badges pinned in their caps.

The mixture, according to the report in the paper, was of 'sandwiches, laughter, tea, tobacco and singing'. There was also a thunderstorm, followed by a rain-soaked dash to the railway station where songs echoed round the platforms as they wai 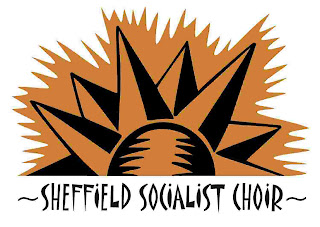 ted for their trains home. A year later 2,000 (others estimate 12,000 people attended Hardcastle Crags.
According to the Hebden Bridge Times, May 29th 1896, “Whit Monday is a red-letter day for the socialists, and demonstrations take place on this day all over the country. The Yorkshire Independent Labour Party also observe this custom and this year they held their annual demonstration at Hardcastle Crags. Glorious weather prevailed and the gathering was a monster one in every particular. Trips were run from all parts of Yorkshire and large contingents came from Leeds, Bradford, Halifax, Huddersfield, Dewsbury, Liversedge, Brighouse, Sowerby Bridge...(from Lancashire delegations) from K eighley, Cleckheaton, Horbury, Heckmondwyke, Honley, Thornhill and Meltham and also from several towns in Lancashire, notably Todmorden, Rochdale, Oldham and Burnley….. It is computed that during the day the Crags were visited by fully 12,00 0 persons.”

A musical programme preceded the speaking, the artists being members of the Halifax, Bradford, Leeds and Keighley Clarion Vocal Unions and a quartette party from Golcar.“ Extracts from Life and Letters of Caroline Martyn “During this month of May, Caroline Martyn attended a demonstration at Hardcastle Craggs, and the following description is given of her at that time: Then from a dais-like, heath-clad rock, around which the choristers had stood, arose our Carrie Martyn.

Truly no Diana of old was ever more godlike than she, as she stood before the background of waving green, and with the wind gently moving her flowing gown into graceful folds, spoke from her noble heart words of burning fervour and truth, which it wer e well that the whole world upon that day should hear and heed.”


Glasgow and Bristol both had choirs by 1896, when national CVU Hardcastle Crags Meet that year attracted more than 2,000 people to listen to massed choirs on the hillside, and speeches by Caroline Martyn and Keir Hardie.

On Jubilee Day, 1897, a big rally was held at Bolton Woods, and so much enthusiasm was displayed that it was resolved to have a joint concert and Contest each year. membership reached 1,250.

In May 1899 the first Clarion Vocal Union (Choir) United Concert at the Free Trade Hall in Manchester took place, with 450 singers in fourteen choirs competing for the ivory and gold Challenge Baton which had been presented by the Clarion Board.

This was to be an annual musical festival event for the next thirty years, bringing hundreds of Clarionettes to Manchester, cyclists and non-cyclists alike. Songs were specially written (like the 'Song of the Clarion Scout') and poems were set to music to form an extensive Socialist repertoire.

Young composers and musicians were drawn to the cause, like Gustav Holst, who was a regular cyclist and often rode with his trombone strung across his back.

While studying at the Royal College of Music and living in a bed-sitter in Hammersmith, Holst became the first conductor of the Socialist Choir there. He wrote reports for The Clarion about the choir, one of whose members was his future wife Isobel.

Gustav Holst's fellow student Rutland Boughton, set poems by William Morris to music, and they appeared in the Clarion Song Book published in 1906.

The Clarion Board of Directors presented a Baton of ivory and gold which has been keenly contested for, and, until 1915, Annual Contests took place without a break. In 1915, the Contest, which should have taken place in Sheffield, had to be abandoned owing to lack of railway facilities, and it was only in 1922 that, on a small scale, it was revived. A major Clarion Vocal Union festival was held at the Manchester Albert Hall on 24th Oldham, Rochdale, Sheffield and Manchester May 1924, with choirs from Bradford, Hyde, Leeds,

The Baton was won in 1923 by the Sheffield Choir and 1924 by Bradford. Although the actual contest adds a zest to the evening's enjoyment, the best part of the Concert has always been the singing by the massed Choirs. Unaccompanied pieces are generally chosen, and these range from the glees and madrigals of the Elizabethan masters to the part songs and folk song arrangements of modern composers. 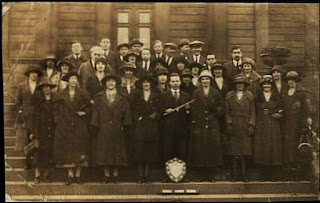 Clarion Choirs still exist in Birmingham, Sheffield and Nottingham and Bolton Clarion Choir has recently be reformed and East Lancashire.

In 2007 Bolton Wood Street Choir and Burnley Clarion Clarion Choir met on the first Sunday in June at the Nelson Clarion Tea room in order to revive a Clarion tradition of "Clarion Sunday's"and in 2008 thirty six members of different Socialist choirs attended in poor weather.

I have seen reference to a Plymouth Clarion Choir established in 1915,

A number of "progressive" Choirs are presently being established across Britain, hopefully the Clarion movement will offer a big umbrella to nurture this growing trend as it did over one hundred years ago 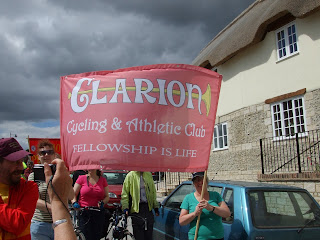 A Brief History of Clarion Choirs
By
Michael Walker