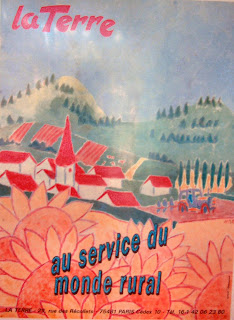 The Communists and Rural France 1948.

The Communists in have a very efficient rural organisation.

"They have two ways of acting through infiltration into the Confederation Generale de l'Agriculture (C.G.A.) especially on the lower levels, and through the technically well edited agricultural weekly La Terre, printed in ten different editions and 350,000 copies.

For its expert value this weekly is also bought by people who are not Communists but who do not skip the political articles.

How deeply the Communists have penetrated into the rural unions, whose executives were elected in 1945 immediately after the Liberation, may be seen by the example of the Department Haute Garonne, , where the Communists, while controlling only 4.6 per cent of the seats in the municipal councils have 36 per cent of the seats in the executive of the local rural union, including the post of chairman.

The Communists have arguments for everybody : for the owners and leaseholders it is the struggle against the Marshall Plan which will lower the prices for agricultural products; for agricultural workers it is the maintaining of the decree of April 13th, 1946, granting them privileges with respect to the owners.; for everybody it is the sabotage of the "Mayer Plan," which attempts to draw some money from the proverbial peasant stockings where it accumulated during the war.