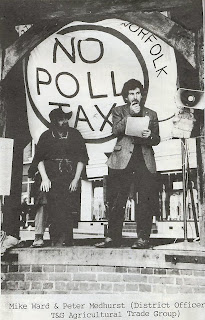 In 1381 many hundreds of people were slaughtered here in their struggle against the Poll Tax. It was the last stand in the countrywide uprising against the Tax, which was imposed by Richard 11 in order to pay for his war with the French.

The people of rose up in revolt as in other countries because they knew that this hated tax was an attack on their families and their communities.

They were being made to pay for the rich to stay rich while they themselves had to struggle to even survive.

The Poll Tax was finally abolished because it was obvioulsy un workable. It just couldn't be collected.But over the centuries, the working people of had to struggle to feed, clothe & house their families on very low wages. They learned to organise themselves and gradually formed Trade Unions such as the National Agricultural Workers' (NAWU) to improve their condition.

Now the Poll Tax has been dredged up from history to be used once more as a battering ram against our communities.

Our local services are all under threat from this tax which was imposed against the will of the majority o-f the people in order to pay for the rich to stay rich and to hlep feed the war machine as before.