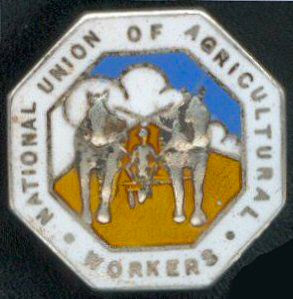 The Trades' Union Congress! General Council is doing good work in the (promotion of organisation amongst the agricultural workers).

The (Council has just issued, special appeals, to. its affiliated societies for the continuation of their support, both financial and otherwise, to the special organisation campaign, which has been, conducted during the past year – in the agricultural ' areas throughout the kingdom. They now publish the following short note in connection with the continuation of the campaign during the present year.

We preach, solidarity, but we only creep towards its; practice by slow deigrees. A big move' will be made when we can get land-workers and worker's! in towns to' pull together.

There is' nothing which cannot be done if such unity can be achieved.

The Trades Union Congress (TUC) showed true awareness' of these facts at in September last (1925), and the Report on the Organisation Campaign, for Agricultural Workers' was received with such strong approval that the campaign is now being extended to fresh areas. Last year,

It was conducted in, , , Nottinghamshire, , Dorset, Anglesey, Cheshire, Hereford, Surrey, Cornwall, and in a few months intensive work, over 10,000 agricultural trade' unionists were enrolled, and many new branches opened.

This work cannot be carried on without funds and though Congress voted: £500 towards its continuance, an appeal is now being issued, to all organisations affiliated to the Trades Union Congress, for additional support. Every trade' unionists who can offer any help, however little, will be helping' not only their agricultural worker, but the whole movement.