PLOUGH MONDAY - (first Monday after the feast of the Epiphany)

Held on the first Monday after the feast of the Epiphany

A light was kept burning in the local church before the image of a saint that was known as the plough light.

"This festival developed directly from the institution of the Plough Lights. In the 15th, 16th, and 17th centuries almost every parish church possessed its plough, before which a light burnt.

Several villages had more than one plough light. For example, the Norfolk parish of Salle maintained four, additional to the church light.

These lights were placed where men could salute them as they passed on their way to work in the fields."

An inscription on the Ringers’ Gallery at Cawston Church gives evidence of the Importance of these lights.

And send us all corne enow

Our purpose for to mak

At crow of cok

Of the plwlete of Sygate

Be mery and glade

Wat Goodale this work made

In Dorchester, Fred James, Agricultural Workers Union organiser and Mayor of the town from 1934 to 1936, had decided that Plough Monday was a festival worth reviving because it marked the beginning of the farming year. He said, ‘When we cease to recognise the importance of the plough, it will be a bad day for this country. 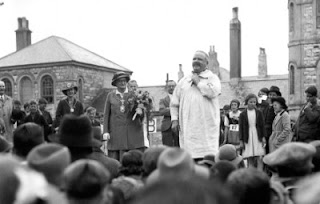 .'Plough Pudding' a boiled suet pudding, containing meat & onions was eaten on this day in Norfolkhttps://www.lavenderandlovage.com/.../norfolk-plough...Plough Monday 2020 at Tilney All Saints (West Norfolk)
Thanks to Libby Ashworth article
at Saturday, December 26, 2020