By Fay Hutchinson
Encyclopedia of Saskatchewan 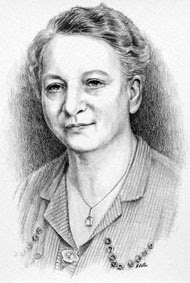 Louise Lucas (née Nachweih), known as the Mother of the CCF (Co-operative Commonwealth Federation), worked to advance Saskatchewan farmers, especially farm women. Born in Chicago in 1885, the daughter of German immigrants, Louise Lucas and husband Henry immigrated to Milestone in 1911.

They settled at Mazenod in 1920. Considering herself an equal partner on the farm, she became interested in the co-operative ideas of the farm movement and joined the local women’s lodge of the United Farmers of Canada (UFC), Saskatchewan Section. Elected a director in 1930, she became president of the UFC Women’s Section from 1931 to 1933. In summer 1932, Lucas helped form the Saskatchewan Farmer-Labour Group and participated in the Calgary conference where the CCF was born. In 1933, at its first national convention, she introduced the health services section of the Regina Manifesto. Lucas was a popular speaker in German as well as English.
Despite her duties as a farmer and mother of six, she constantly toured Saskatchewan, spreading her message of co-operation, women’s rights, and social justice. She served on CCF national and provincial councils, and ran—unsuccessfully—in the federal elections of 1935 (Battlefords constituency) and 1940 (Melville). She continued organizing in Melville until 1943, when she was nominated again; illness then forced her to withdraw. She died on October 17, 1945. Louise Lucas was inducted into the Saskatchewan Agricultural Hall of Fame in 1973.