75th anniversary of the last armed battle on English soil: May 31 1838


It is 175 years since the last armed rising on English soil.

At Bossenden Wood in Kent on 31st May 1838 troops of the 45th foot regiment engaged the followers of ‘Sir William Courtenay’.

At the end of the battle an army officer, Courtenay and up to a dozen of his followers were dead.

To give a sense of the scale of this battle, EP Thompson described it as ‘perhaps the most desperate battle on English soil since 1745’ with a death toll, similar to, or perhaps higher than that of Peterloo in 1819. 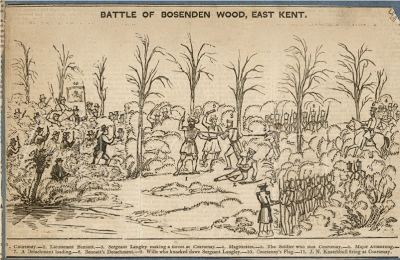 Just weeks earlier the six demands of the Peoples’ Charter had been launched in London leading to a mass movement which aimed to secure political rights for working men.

This political engagement was, very largely, over time, successful.

Yet the events in Bossenden Wood a few weeks later should not be easily dismissed because they were the path not taken which ended in failure and death.

Courtenay, real name John Nichollos Tom, (56 Pyder Street, Truro, Cornwall) by profession a wine merchant, had been a follower of the radical Thomas Spence and was perhaps broadly in the tradition of the millenarian Joanna Southcott.

On release, EP Thompson notes, that Courtenay lived in the homes of peasants in villages around Canterbury.

Just a few years after the Captain Swing riots and the Tolpuddle Martyrs, these were tough times for agricultural labourers, paid little to do back breaking work.

Courtenay find a ready audience for his radical and millenarian ideas. 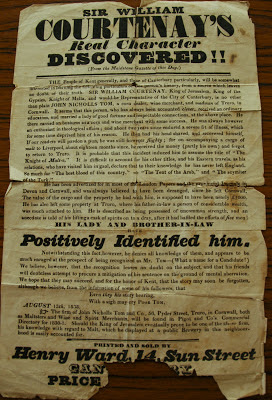 In particular he denounced the 1834 Poor Law Act which ushered in the era of the Workhouse.

But his preferred method of opposing it was far from the political agitation of the People’s Charter.

In May 1838 Courtenay began to tour around Kent villages on horseback armed with pistols and a sword leading between fifty and a hundred labourers armed, Thompson notes, with bludgeons.

He must have been something of a spectacle riding with a loaf of bread on a pole under a blue and white flag with a rampant lion.

He read to his followers from the Bible, in particular James Chapter V stating:

‘go to now, ye rich men, weep and howl for your miseries that shall come upon you’.

A police officer was sent to arrest him and was promptly killed.

At this point Courtenay and a group of followers went to Bossenden Wood, where in due course battle was joined with an army unit of 100 soldiers.

The battle was an unequal one. The army had guns. The labourers did not.

However army Lieutenant Boswell Bennett was shot and killed by Courtenay before he himself was shot dead. On 2nd June in Canterbury a verdict of justifiable homicide was returned.

The millennarial strategy of Courtenay seems a world apart from that of the People’s Charter but it as well to remember that both appealed to very similar audiences.
When it came to the Government the distinction was hardly made at all.

When the Chartists attempted to lead an armed revolution at Newport in November 1839, the crack regiment of the British Army was despatched and in another unequal battle it shot down and killed numbers of Chartists in the centre of Newport.

That regiment was the 45th foot that had also shot down Courtenay and his followers at Bossenden Wood 18 months earlier.