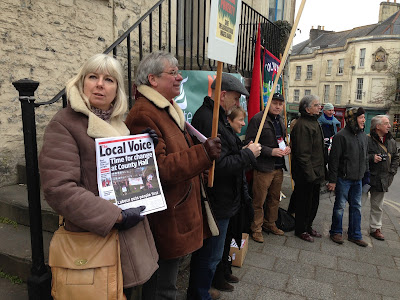 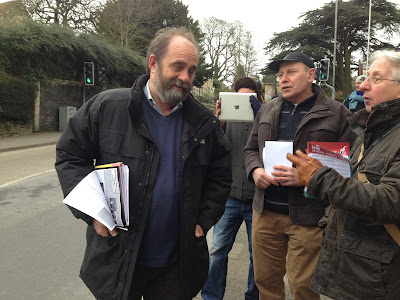 Somerset Farm workers and local "progressives" keep up the pressure on farming minister David Heath over Agricultural Wages Board
Farm workers and supporters campaigning to save the Agricultural Wages Board (AWB) were back on the streets of Frome to lobby the surgery of Liberal Democrat farming minister David Heath Saturday (2nd March 2013).
David Heath , the Minister, MP for Somerton and Frome, dodged questions from members of the public and farm workers union Unite when they protested outside his surgery in February.
Country Standard supporters who backed the Lobby praised local activists for their continued support in highlighting the plight of rural workers in Somerset
They again tried to ask him why he has decided to abolish the AWB, despite signing an Early Day Motion in 2000 in support of the Board, which sets legal rates of pay and conditions for 150,000 agricultural workers. Abolition of the AWB will mean losses worth at least £25 million a year for farm workers.
The south west has 26,000 agricultural workers, with 1,000 working in Mr Heath’s constituency.
Farm worker Steve Leniec, who chairs Unite’s rural and agricultural committee, said Mr Heath should also come clean over coalition government plans to water down protection for gangworkers under the guise of ‘simplifying’ the Gangmasters Licensing Authority.
Mr Leniec said: "David Heath has recently called the AWB ‘a costly relic of a previous age’. That’s not what he was calling it in 2000. He has since claimed he made this commitment to the Early Day Motion before there was a national minimum wage. But the national minimum wage was in force months beforehand. And if he knew anything about the industry and its workers, he would be honest enough to admit that the AWB is about far more than a minimum wage.
"A clear majority of those responding to the government’s consultation in the autumn on the abolition of the AWB, including farmers and farm workers, disagree with him and the government. He’s not listening to the industry and he’s not listening to his constituents. We hope he’ll listen to us this Saturday."
The people of Somerset get their chance to have a say on the behavior of their LibDem MP's on 2nd May 2013 at the County Council Elections, where the demand to maintain the Agricultural Wages Board and secure a Rural Living Wage will be on the ballot paper
Turn the Anger into Votes in Somerset
at Sunday, March 03, 2013