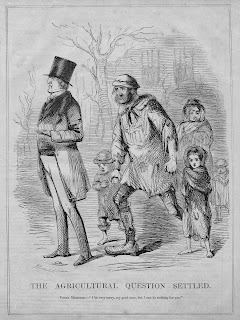 The Agricultural Question
Prime Minister:
"I'm sorry, my good man, I can do nothing for you"
LibDem Farm Minister Axes Agric Wages Board Days Before Xmas - Plunging Farm Workers Into Poverty

Huw Irranca-Davies MP, Labour’s Shadow Farming Minister, responding to the amendment tabled in the House of Lords to abolish the Agricultural Wages Board, said:

“It is typical that the Government sneaked out this announcement just hours before Parliament shuts down for Christmas, ignoring the strong views against abolition expressed in the consultation, and with no regard to the will of the Welsh Government. The Government admits that the abolition of the Agricultural Wages Board will take £240 million out of the pockets of farm workers and rural communities over the next ten years.

“David Cameron’s out of touch government has delivered a bitter blow to the rural economy just before Christmas and to thousands of low-paid farm workers who will be worried about their pay falling. People in the countryside need a One Nation plan to create jobs and growth, not this Government’s approach that leaves our lowest paid workers out of pocket.”

"Labour's Shadow Farming Minister Huw Irranca-Davies MP,  has worked tirelessly to retain the AWB, he recently secured with cross party and NFU support  a Grocery Code Adjudicator with real power to protect farmers from the excessive power of the supermarkets, it's a real shame that cross party and NFU ethical approach is ignored when it comes to paying farm workers a living wage"
at Friday, December 21, 2012