COTTAGES AND AN ACRE FOR FIGHTERS

CO-OPERATIVE FARMS TO BE STARTED

Considerable headway has been made with the Government's plan  for  the settlement of ex-soldiers on the laud, and a Bill will be introduced when Parliament, meets asking for compulsory powers. in this direction.

The Government recognises the country's debt to ex-Service men, and, subject to the consent of Parliament, is disposed to put aside a sum of money running into a good many millions for their settlement oh the land.

Owing to the huge outlay required to equip a small holding, it is impossible to make it. an economic success, if the. rent is based on the capital outlay,  and no man could live on a small holding on that basis.  But some holdings will be carefully selected, and given over to men who have had experience, and have some capital, or who can get it from the State. 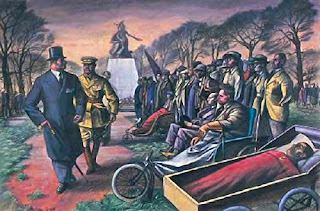 It is understood that the authorities hold the.opinion that tile best form of  land-settlement for  the men is to give them  a cottage,  with perhaps one acre of  land, which would be partly garden land, the other part being used tor. keeping poultry, pigs, or goats, and tor fruit-growing.

The occupier or owner would make the main part  of his living by .seasonal work, either  in the neighbouring town or on the land.

It is  also desired to have farms on  which there will be a-manager, and which will he cultivated by men who are not. agricultural labourers, though they will get the agricultural wage of  the district.  They will be partners in the concern, and benefit by its progress.  The men will get the profits, or their share of the surplus 'profits, and  the -farm  will be cultivated  intensively.

The scheme Will be worked through the County Councils, and steps will .be taken to put pressure upon them to make full use of the powers given them.  If they do not' act the Board of Agriculture can act in default.

Methods For Acquisition of Land.

As to the acquisition of the land for the small holdings, -three methods present themselves:—

Purchase by cash.
Rent for thirty-five years,  and renewal by compulsion for a further term.
Annuities charged upon  the county rate.

Landowners will be probably allowed the same sort of advantages in the way of pecuniary loans on easy rates as are allowed to County Councils.

Two conditions which will-be applied, however, will be (1) that the land should be approved
by the Board of Agriculture, and (2) that the occupier of the holding should have security of
tenure as long as the loan lasts.

The policy suggested is that the County Councils should buy and equip, and that every year for the next- seven years the Board of Agriculture should pay any deficiency between the receipts and expenditure.

SOLDIERS AND THE LAND.

Perhaps the most promising feature of the, plans for the settlement of ex-Service men on the land -which the Government is understood to have in contemplation  is  the proposal for a type of co-operative farm.  The whole question is, of course, conditioned by the extent to which our fighters desire such a life.   The  number  is  probably  greater  than  many  suppose.

When an enquiry was made some time ago, the percentage was found to be unexpectedly high. That being the case, if is essential that no false hopes shall be aroused.  Life on the land has it appealing qualities, but this is a practical world, and mere ideals will not satisfy hunger.  Among such ideals, that usually entertained about the small holding is liable to prove disappointing.  It is believed by those who have the best right to form an opinion that the small holding is not a living proposition for corn-growing and cattle raising.  On the other hand, the co-operative farm is; and if such rural communities can be established on the lines foreshadowed, they promise to be an important, factor in the re population of rural England and  the providing of a larger proportion of our food necessities.

Several methods whereby that difficulty can be overcome are being considered by the Government, and they are of such a character as should ensure,their receiving the assent of Parliament.  The essential thing is that this important experiment in land settlement shall be safeguarded to the utmost against, disillusionment and tragic failure.   .

Coalition Government Liberal Prime Minister, Lloyd George's promise, of a "Land fit for heroes" for those soldiers lucky enough to survive the bloody battlefields of Western Europe and Gallipoli was in reality a life for working class men of grinding poverty, unemployment, poor health and slum housing conditions a situation only resolved by the great reforming Labour Government of 1945.

A few small holding schemes were established for returning soldiers, however many failed due to lack of support from the authorities, those that did survive and were later transferred to County Council control and later were sold off piecemeal or later still in the 1980's under instruction from Tory  Chancellor John Mayor.