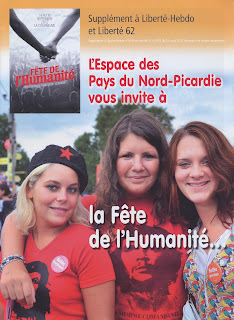 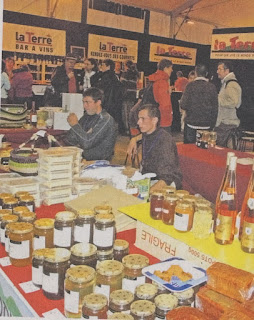 The “Fête de l’Huma” has taken place every year since 1930, except for a brief hiatus during the Nazi occupation.

Originally organised as a means to raise funds for l’Humanité, the popular music event has become a major fixture of the French political calendar marking “La Rentrée” [the return to work after the summer break] of the Left.

Organisers expect 500,000 people to attend the event, which is made all the more popular by the low entrance fee (20 euros for three days) and a musical line-up which this year includes British band New Order, rocker Pete Doherty, US singer-poet Patti Smith and the French National orchestra, among many others.

The Fête de l’Huma is a political movement in itself – posters throughout the festival, which has taken on the aspect of a small town, (Left Rural Journal "La Terre" has traditionally had a high profile) call for a referendum on the EU fiscal treaty and for an end to unpopular austerity policies.

But above all, the event is a meeting place for French and international left-wing movements, with hundreds of stands serving French regional food and wine amid intense political debates.

‘A chance to have fun with your mates’

France’s hugely influential trade unions are omnipresent.
Pierre Esparseil, an employee of French energy giant EDF and a representative of the CGT union, was attending the festival with a dozen of his union “comrades”.

“Most people are here for the party in a political atmosphere that brings us all together,” said Espareil, who had travelled from Toulouse in southwest France.
“It’s a chance to have fun with your mates, meet like-minded people and enjoy the food, drink and music. I suppose some people are just here for the politics, but I haven’t met any of them in the 18 years I’ve been coming.”

Laure Perrin, 29, told FRANCE 24 the festival represented the “struggle and hope” of France’s diverse left-wing movements in a “spirit of optimism”.

“We’re here to celebrate our pride in our politics,” said the young party activist. “It is our chance to network, meet people, engage in debates, and just party.”
Spanish Civil War remembered

The festival boasts an extraordinary variety of political and social movements.
Some 80 countries are represented. The Palestinians have no less than four stands, alongside Communist movements from Iran and Iraq, an Algerian secular group, Irish nationalist party Sinn Féin and a women’s rights tent complete with a kitchen producing large quantities of couscous.

British trade unions and political organisations are conspicuous by their absence.
The ACER-AVER association, which represents the memory of the International Brigades from the Spanish Civil War, has a particularly popular stand.

“We’re here to celebrate and remember the values of those who fought for the Republican cause in Spain,” said Bertrant-Puig Georges, a Spanish émigré whose father fought against Franco and was exiled to France with thousands of other Spaniards after the bitter civil war.

“The cause for which they fought is still relevant today. People all over the world are still fighting for their freedom in the face of oppression. That is why we are here today.”