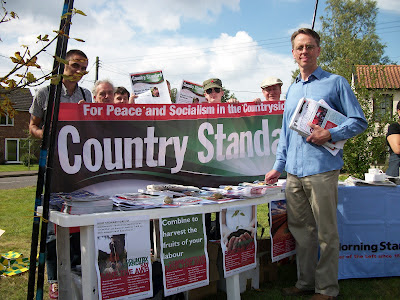 Over one thousand people attended the this years annual Burston Rally held at Burston near Diss, Norfolk on Sunday 2nd September 2012.

People from across East Anglia and beyond paraded with traditional trade union, community and party banners around the village, following the route of the original 1914 strike.


The event in the Norfolk village of Burston commemorates the strike school set up after Kitty and Tom Higdon were sacked from the village school for their socialist and trade union views in 1914.

Their pupils walked out in support and with the backing of parents and trade unionists the Higdons opened the strike school to educate local children which ran until 1939.

The Unite national officer Cath Speight said that today's festival, organised by Unite with the support of South East Region TUC (Sertuc), the Burston strike school trustees and Thompsons solicitors, was a chance for activists to "re-energise" and take inspiration for future struggles.

She said: "It helps us to remember where struggle came from and how agricultural workers and children have been at the forefront of rural life."

The rally is a chance "to remember our forefathers and the struggles they had to endure," she said.

"When you look at what is happening now, we're going back to austerity."

Cath Speight added that there was a fightback against pay cuts, particularly in the agricultural sector.

"Workers are being attacked on all fronts," she said. The Tories are seeking to scrap the Agricultural Wages Board - a move she said "will take £9 million out of the rural economy."

The reason Tom and Kitty were sacked was because they stood up for farm labourers. “It is a reminder of what solidarity in the labour movement could achieve.”

At the Country Standard stall the new edition of Country Standard was well received by old and new readers alike. Older readers recalling Norfolk hero (and one time Country Standard Editor) Wilf Page's long and distinguished role in East Anglian rural politics and newer readers the Tories threat to the Agricultural Wages Board, Dairy Farming, rural  broadband and new planning regulations that will allow building on our precious historic village greens and fens.

Over 500 copies of Country Standard were distribute and many went away pledging a commitment  to ensure that in ever village and town in East Anglia, the Tories would be challenged now and at the County Council polls in May 2013.

Country Standard is grateful for the continued support of Unite and Unison in the East of England and the pledge of support from Bob Crow at the RMT.

Finally, congratulations to Burston School Strike committee who do a fantastic job in ensuring this annual gathering is not only a huge success but a unique opportunity for "progressives" across the East to meet.