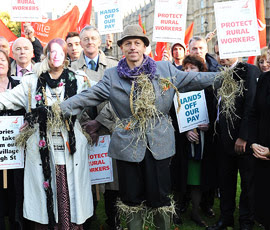 The Coalition of Millionaires has voted by majority of 77 to scrap (Conservative & Liberal democrats ) the Agricultural Wages Board which covers 150,000 agricultural workers and acts as a bench mark for thousands of other rural jobs.

From all over the UK rural workers, some dressed as scarecrows, travelled to London to lobby MPs in a bid to persuade them to back their campaign which has one objective - to maintain the Agricultural Wages Board (AWB).

Rural workers are extremely concerned at this government’s plans to abolish the AWB, a body which has supported rural workers for generations and was set up specifically to protect this vulnerable group of workers. Unite believes that this goes to show that the Tory-led government is completely out of touch with the countryside.

Unite national officer, Cath Speight, said: “According to the government’s own estimates, returning back to the statutory sick and annual leave payments alone, could potentially take over £9 million a year out of workers' pockets.

“This will be very unwelcome news to many of our members, who are already struggling to survive in the face of rising costs and higher food prices. Many have already been told by employers that should the AWB be abolished, their wages will be forced down - this is unacceptable and we can not allow this to happen.

“During this present climate, where people are worried about food production, food security and food supplies, it is astonishing that this government has chosen to attack the very workers who we rely on to maintain supplies and production.”

Unite fully supports this fight back to defend these rural workers and their communities. The union has thousands of rural members who will face a serious attack on their livelihoods if the AWB is abolished.

"This is just another example of attacks upon rural workers by this Tory Government, when rural workers already earn on average £4,000 year less than city workers.

"Tory millionaire Farm minister Jim Paice knows nothing about rural low pay or poverty he spends his time in London on wages set nationally and on a big fat pension. His remarks that farm workers already covered by AWB will continue to be covered by it "for ever and a day" are simply an outright lie.

"Jim Paice states “The world has moved on. It is not the forelock-tugging yokel" yet under new proposed Tory employment legislation, if you don't tug your forelock or your just old you can be sacked".