Labour to rebrand as "Party of the Countryside"

Labour to attempt rebrand as 'party of the countryside' 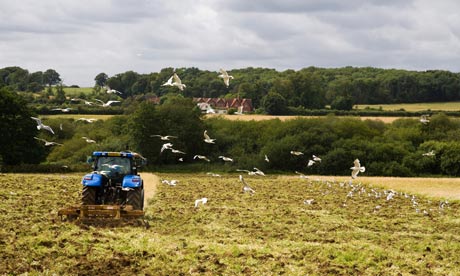 Mary Creagh will tell the Labour conference: 'We want strong rural communities with fair pay at their heart.' Photograph: Graham Franks/Alamy
The Labour party will make an audacious pitch on Tuesday to position itself as the party of the countryside, warning that government plans will see wages cut for adult and child workers in rural areas. The moves follows a turbulent year for the government in the shires, with a U-turn on plans to sell national forests and uproar over a radical overhaul of the planning system.

"We stand up for fairness in the countryside," Mary Creagh, shadow secretary of state for environment, food and rural affairs will tell the party's annual conference in Liverpool on Tuesday. "We want strong rural communities with fair pay at their heart."
Evoking the Tolpuddle martyrs' fight for fair farm pay in 1834, Creagh will warn against the government's desire to abolish the Agricultural Wages Board, claiming that 42,000 casual workers will see an immediate cut in their pay. The AWB, founded by Labour in 1948, sets minimum wages and conditions for over 150,000 workers in England and Wales.

Its abolition will see the minimum wage of £3.05 for 14- to 16-year-olds go, says Creagh, and weaken protection for permanent workers, whose homes are often tied to their employment.

Creagh, the MP for Halifax, will acknowledge the challenge for a party whose strongholds have traditionally been in urban areas. She will say: "Labour is the party of the countryside. The first time I said that in parliament, the Tories laughed. They're not laughing now."

Creagh will also lay claim to a Labour heritage on countryside issues: "We set up the national parks in 1948. We established the green belt [and] the world's first climate change law."

She will accept that people in rural areas thought Labour had lost touch at the last election, and "voted us out". But Creagh believes the party can find success in rural areas because the issues of greatest concern to people are universal: low incomes, jobs, housing and transport.

As well as forestry and planning, she will highlight where she believes the government is vulnerable: cuts to post offices and rural bus services, delays in rural broadband roll-out, the divisive issue of badger culling and the cost of housing. She will also note the nine council seats won by Labour in the Forest of Dean, after the bungled forestry sell-off proposals.

She will argue that the Conservative party's anti-regulation instincts – Defra is undergoing its "red tape challenge" until 3 October – leave it unable to deliver the environment policies needed, and will remind the conference of the budget cut taken by Defra, the largest cut in Whitehall.

Willie Bain, a shadow Defra minister, also acknowledges a pressing electoral reason to build support in rural areas: "We need to win back seats in the south and east of England if we are to form a future government – it's a must."
A vote on the abolition of the AWB is expected before the end of 2011. "We want to make sure Tory and Liberal Democrat MPs are made to feel very uncomfortable," Creagh told the Guardian on the eve of her speech.

Another quango being abolished is the Commission for Rural Communities – axed, claims Creagh, because the government "doesn't want anyone standing up to them". She also highlighted the closing of a third quango, the Aggregates Sustainability Fund, which required quarrying companies to fund restoration work to the countryside after mineral extraction.

Barry Gardiner MP, a former Defra minister and current member of the Defra select committe, said: "The Labour party is on the side of people who are not getting a fair deal. People who work at the sharp end of society delivering the things we depend on and there's no finer example of that than people who labour in the countryside." He said Labour's pitch would only be audacious if it was aimed at major landowners and agricultural companies.