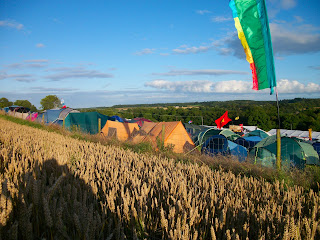 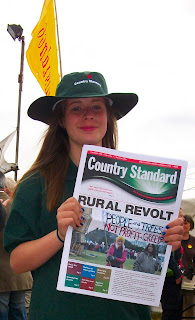 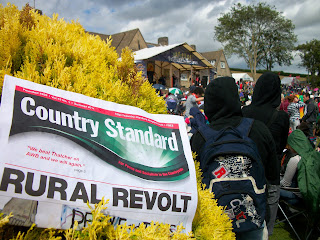 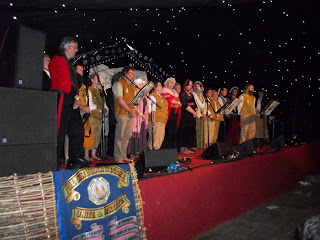 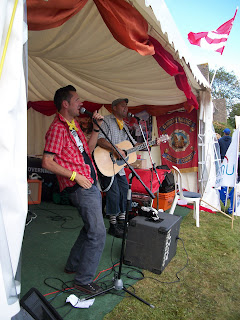 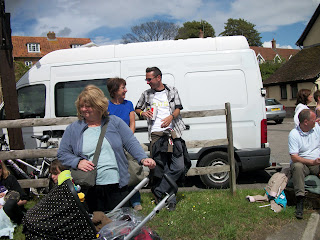 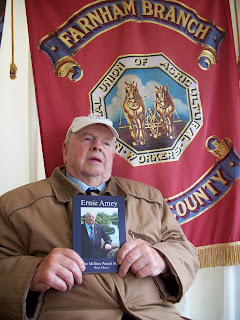 Tolpuddle 2011 was another great year for the reinvigorated “Country Standard”, despite the inclement weather. The bumper 20 page edition of Country Standard, our biggest since our founding in 1935 won many new friends and found favour with our long time supporters.

Over 3,000 copies were distributed during the Tolpuddle weekend and orders taken for many trade union, and party branches.

We of course remain grateful to our supporters who helped distribute Country Standard at Tolpuddle and our advertiser in Unite and Unison.

Highlights of Tolpuddle 2011 included the Folk “Loveless in Hobart” by the Tasmanian Grass Roots Union Choir (Australia), who were inspired by the songs of Graham Moore, Their performance winning great acclaim and themselves a standing ovation from the appreciative Tolpuddle crowd.

The Berlin based Polkaholix rocked the crowd in a barnstorming performance, that had everyone on their feet on Saturday night (While torrential rain swept the camp site).

On the fringe Tolpuddle unofficial house band “Skimmity Hitchers” and Bristol socialist choir sang a great "cider" version of "ring of fire". While doing sterling work in promoting the virtues of Dorset, cider and opposition to the abolition of the Agricultural Wages Board – The audience united in its total opposition to the Tory Cider Tax- “Skimmity Hitchers” class act in the rain.

However, on sunday photos emerged (secured no doubt by News International) which threatened to overshadow the bands success. The pictures purported to show the lead singer of “Skimmity Hitches” allegedly drinking lager at the local pub "The Martyr's Inn" (see above) However, We in Country Standard stand four square behind the "cider punk" band.

On Sunday, the South West TUC even managed to arrange for the sun to make an appearance 5 minutes before the rally, Tony Benn and Billy Bragg ("Never buy the Sun" completing another successful Tolpuddle weekend.

In conclusion a great year for Country Standard, with big thanks to South West TUC for all their hard work in organising an event that consistently puts trade union movement in a positive light.

Were sure the great Dorset agricultural workers union, Arthur Jordan would have greatly impressed at the efforts to encourage unity between town and country – a sentiment we should all sign up to.

See You at Burston in September