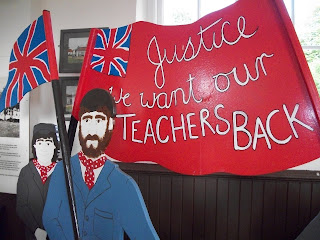 Many trade unionists have heard of the famous Burston School Strike, and the brave stand made by the teachers and children against the squirearchy of that small village near Diss, Norfolk which started in 1914. However few have heard of the Strike schools of Lowestoft involving over one hundred teachers and 1,500 school students

In the 1920s and 30's Britain faced a major depression and mass unemployment, trade unions were increasingly forced to fight to stop huge pay cuts being imposed on workers.

Unions like the National Union Teachers (NUT) had some success in mitigating cuts at national level but some local authorities were determined to ignore national settlements and to challenge the Union.

One such dispute was a prolonged dispute which took place at Lowestoft, Suffolk, when 167 NUT teachers struck in April 1923, when the local education committee tried to cut teachers' pay by 10 per cent and brought in over 100 "non-union" teachers in an attempt to break the teachers strike.

With the support of other unions on the trades council and, crucially, of parents, the NUT members set up a number of strike schools "outside the authorities control" with over 1, 500 pupils attending (this novel approach was no doubt influenced by the success of the Burston strike school).

The Times Educational Supplement reported on 5 May 1923. “About a thousand small boys and girls, with banners, rattles and flags, were led in procession through the town”.

The local authority tried to prosecute a group of parents in June for withdrawing their children, but the case was dismissed by magistrates.

After an 11 month stand off and a cost to the NUT of £44,000 the Authority finally admitted defeat and backed down.