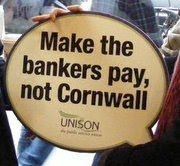 Below are to be found the thoughts of Brian Barder, a Labour supporter and much more besides, on devolution, federalism, England and the Cornish question. Brian was responding to one of my email not to dissimilar to this one.
Thank you for your interesting and thought-provoking message. As a Bristolian, born and brought up in the south-west, I have a very soft spot for Cornwall, where I have spent some of the most blissful holidays of my life ever since my childhood, and indeed an equally soft spot for Cornish people. So I'm well disposed to some of the arguments in your message.
My general view, for what it's worth, is that the first step has to be to be the establishment of a parliament and government for England, which will complete the currently stalled process of turning the UK into a federation of the four nations. This will also entail a written federal constitution and the conversion of the present Westminster parliament and government into federal organs, and the transfer of all remaining powers and responsibilities for internal matters to each of the four national parliaments and governments. All this will be intensely controversial and will take a good many years. Even the emergence of a national consensus in its favour will take a long time, and will require imaginative, resourceful and energetic national leadership of a kind that seems to be in short supply at the moment.
A central feature of the new federalism should, in my view, be the entrenchment in the constitution of the principle of subsidiarity, under which each of the four constituent nations would be required by the constitution to devolve its (by then very extensive) powers further downwards as far as it's possible to push them, right down to town and village level, while of course it would be up to each of the national parliaments and governments to decide, after local consultation, the precise ways in which this should be done. This would be different in each of the four nations, and indeed in the case of England, as the biggest of the four, internal devolution would no doubt take different forms in different parts of the country according to the wishes of local people. I can well imagine that consultations in Cornwall would lead to the establishment by the English parliament and government of very much the kind of local autonomy for Cornwall and Cornish institutions that you advocate. Consultations elsewhere in south-west would no doubt produce different solutions, and those in the north-west and north-east, and in south-east England, would produce different patterns again.
I realise that such a long-term programme of change, for which there isn't yet even a consensus in the UK, would mean an unacceptably long wait for Cornish people impatient for more control over their own destiny. But I fear that the present government and parliament at Westminster, which currently do double duty as a government and parliament for England as well as a government and parliament for the whole UK (other than for subjects at present devolved to three of the four nations), are most unlikely to move to a special status for Cornwall in isolation, or ahead of a general UK-wide (or England-wide) process of further devolution and acceptance of the principle of subsidiarity within each of the four nations. And those things are going to be a long time coming.
However, this can only be one private person's opinion, of no greater validity than anyone else's. I hope that events will prove me wrong, at any rate about the time it will take to get all these building blocks into place.
PS: I very much hope that the movement for Cornish autonomy and self-government will be able to resist the apparent tendency to occupy a space well to the right of the political spectrum, which seems to be where other nationalist movements and parties (especially those with Little Englander proclivities) tend to go. Such positioning risks alienating progressive, small-l liberal people who should be instinctively sympathetic to much of what you seek to achieve, and whose support will be absolutely essential if you are ever going to achieve your aims. I also respectfully suggest that voicing suspicion and resentment of an alleged plot deliberately to assimilate Cornish people into a larger English and British identity and to destroy their Cornish identity strikes most sensible people outside Cornwall as paranoia.
Good luck!
Brian Barder
5 April 2011
at Wednesday, April 06, 2011